by Nature Mates on October 19, 2015 in Mammals, Monotremes

The short-beaked echidna (Tachyglossus aculeatus) is one of four living species of echidna and the only member of the genus Tachyglossus. It is covered in fur and spines and has a distinctive snout and a specialized tongue, which it uses to catch its insect prey at a great speed. Like the other extant monotremes, the short-beaked echidna lays eggs; themonotremes are the only group of mammals to do so.

The short-beaked echidna has extre 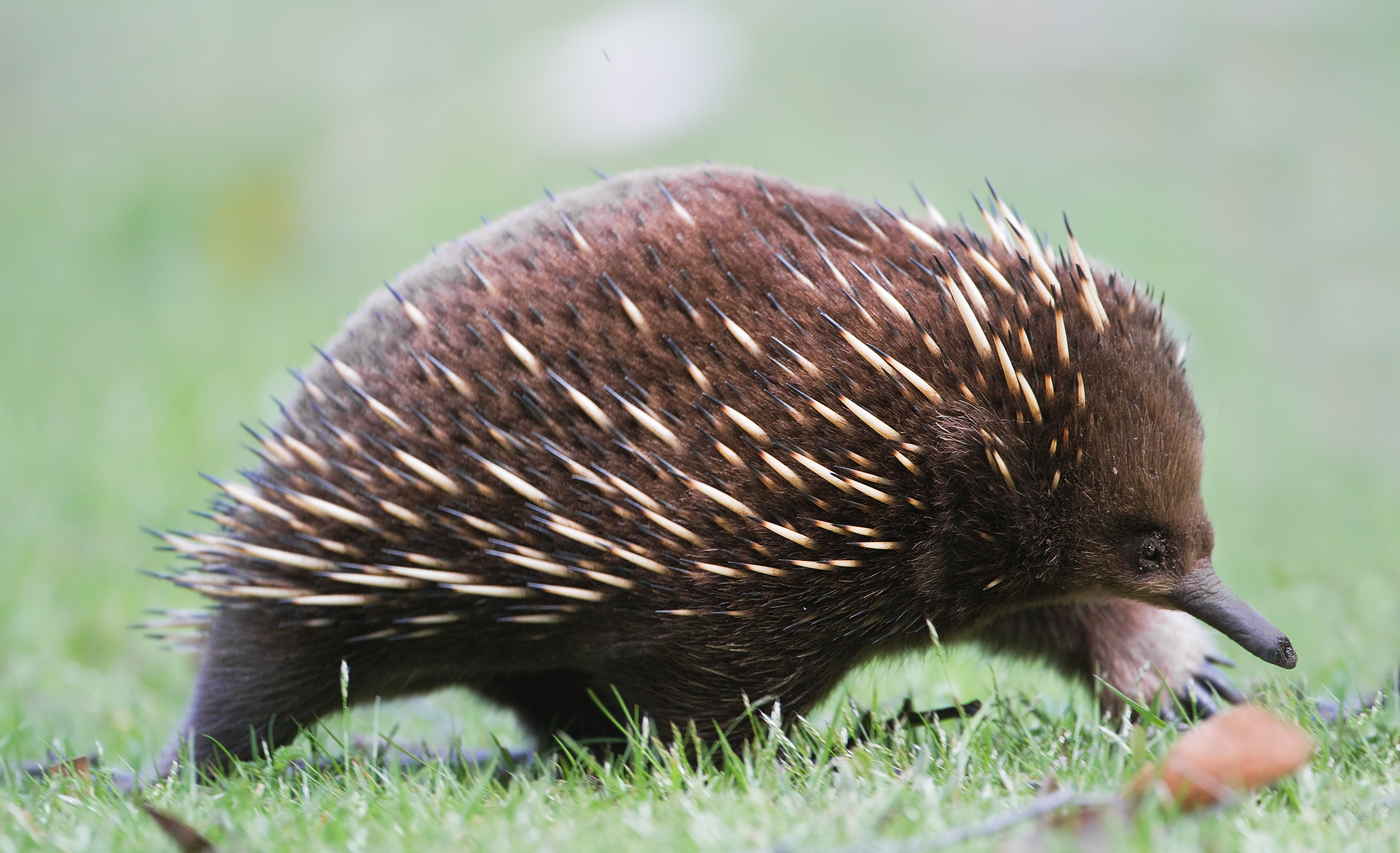 mely strong front limbs and claws, which allow it to burrow quickly with great power. As it needs to be able to survive underground, it has a significant tolerance to high levels of carbon dioxide and low levels ofoxygen. It has no weapons or fighting ability but repels predators by curling into a ball and deterring them with its spines. It lacks the ability to sweat and cannot deal with heat well, so it tends to avoid daytime activity in hot weather. It can swim if needed. The snout has mechanoreceptors and electroreceptors that help the echidna to detect its surroundings.

During the Australian winter, it goes into deep torpor and hibernation, reducing its metabolism to save energy. As the temperature increases, it emerges to mate. Female echidnas lay one egg a year and the mating period is the only time the otherwise solitary animals meet one another; the male has no further contact with the female or his offspring after mating. A young echidna is the size of a grape but grows rapidly on its mother’s milk, which is very rich in nutrients. Baby echidnas eventually grow too large and spiky to stay in the pouch and, at around six months of age, they leave the burrow and have no more contact with their mothers.

The species is found throughout Australia, where it is the most widespread native mammal, and in coastal and highland regions of southwestern New Guinea, where it is known as the mungwe in the Daribi and Chimbu languages.[3] It is not threatened with extinction, but human activities, such as hunting, habitat destruction, and the introduction of foreign predatory species and parasites, have reduced its distribution in Australia.

Short-beaked echidnas are typically 30 to 45 cm (12 to 18 in) in length, with 75 mm (3 in) of snout, and weigh between 2 and 7 kg (4.4 and 15.4 lb).[17] However, the Tasmanian subspecies, T. a. setosus, is smaller than its Australian mainland counterparts.[18] Because the neck is not externally visible, the head and body appear to merge.[19] The earholes are on either side of the head,[19] with no external pinnae.[19] The eyes are small, about 9 mm (0.4 in) in diameter and at the base of the wedge-shaped snout.[20] The nostrils and the mouth are at the distal end of the snout;[19] the mouth cannot open wider than 5 mm (0.2 in).[21] The body of the short-beaked echidna is, with the exception of the underside, face and legs, covered with cream-coloured spines. The spines, which may be up to 50 mm (2 in) long, are modified hairs,[22] mostly made ofkeratin.[23] Insulation is provided by fur between the spines, which ranges in colour from honey to a dark reddish-brown and even black; the underside and short tail are also covered in fur.[22] Colouration of the fur and spines varies with geographic location. The echidna’s fur may be infested with what is said to be the world’s largest flea, Bradiopsylla echidnae, which is about 4 mm (0.16 in) long.[22]

The limbs of the short-beaked echidna are adapted for rapid digging; they are short and have strong

claws.[22] Their strong and stout limbs allow it to tear apart large logs and move paving stones, and one has been recorded moving a 13.5-kg (30-lb) stone; a scientist also reported that a captive echidna moved a refrigerator around the room in his home.[24] The power of the limbs is based on strong musculature, particularly around the shoulder and torso areas.[25] The mechanical advantage of its arm is greater than that of humans, as its biceps connects the shoulder to the forearm at a point further down than for humans,[26] and the chunkyhumerus allows more muscle to form.[27]

The claws on the hind feet are elongated and curved backward to enable cleaning and grooming between the spines. Like the platypus, the echidna has a low body temperature—between 30 and 32 °C (86 and 90 °F)—but, unlike the platypus, which shows no evidence of torpor or hibernation, the body temperature of the echidna may fall as low as 5 °C (41 °F).[28]The echidna does not pant or sweat[29] and normally seeks shelter in hot conditions.[30] Despite their inability to sweat, echidnas still lose water as they exhale. The snout is believed to be crucial in restricting this loss to sustainable levels, through a bony labyrinth that has a refrigerator effect and helps to condense water vapour in the breath.[31] The echidna does not have highly concentrated urine, and around half of the estimated daily water loss of 120 g (4.2 oz) occurs in this manner, while most of the rest is through the skin and respiratory system.[32] Most of this is replenished by its substantial eating of termites—one laboratory study reported ingestion of around 147 g (5.2 oz) a day, most of which was water.[32] This can be supplemented by drinking water, if available, or licking morning dew from flora.[33]

In the Australian autumn and winter, the echidna enters periods of torpor or deep hibernation.[34] Because of its low body temperature, it becomes sluggish in very hot and very cold weather.[31]

Like all monotremes, it has one orifice,[35] the cloaca, for the passage of faeces, urine and reproductive products.[34] The male has internal testes, no externalscrotum and a highly unusual penis with four knobs on the tip,[36] which is nearly a quarter of his body length when erect.[37] The gestating female develops a pouch on her underside, where she raises her young.[38]

The musculature of the short-beaked echidna has a number of unusual aspects. The panniculus carnosus, an enormous muscle just beneath the skin, covers the entire body.[39] By contraction of various parts of the panniculus carnosus, the short-beaked echidna can change shape, the most characteristic shape change being achieved by rolling itself into a ball when threatened, so protecting its belly and presenting a defensive array of sharp spines. It has one of the shortest spinal cords of any mammal, extending only as far as the thorax.[40] Whereas the human spinal cord ends at the first or second lumbar vertebra, for the echidna it occurs at the seventh thoracic vertebra.[41] The shorter spinal cord is thought to allow flexibility to enable wrapping into a ball.[41]

The musculature of the face, jaw and tongue is specialised for feeding. The tongue is the animal’s sole means of catching prey, and can protrude up to 180 mm (7 in) outside the snout.[17] The snout’s shape, resembling a double wedge, gives it a significant mechanical advantage in generating a large moment, so makes it efficient for digging to reach prey or to build a shelter.[42] The tongue is sticky because of the presence of glycoprotein-rich mucus, which both lubricates movement in and out of the snout and helps to catch ants and termites, which adhere to it. The tongue is protruded by contracting circular muscles that change the shape of the tongue and force it forwards and contracting two genioglossal muscles attached to the caudal end of the tongue and to the mandible. The protruded tongue is stiffened by a rapid flow of blood, which allows it to penetrate wood and soil. Retraction requires the contraction of two internal longitudinal muscles, known as the sternoglossi. When the tongue is retracted, the prey is caught on backward-facing keratinous “teeth”, located along the roof of the buccal cavity, allowing the animal both to capture and grind food.[21][43] The tongue moves with great speed, and has been measured to move in and out of the snout 100 times a minute.<sup id=cite_ref-e38