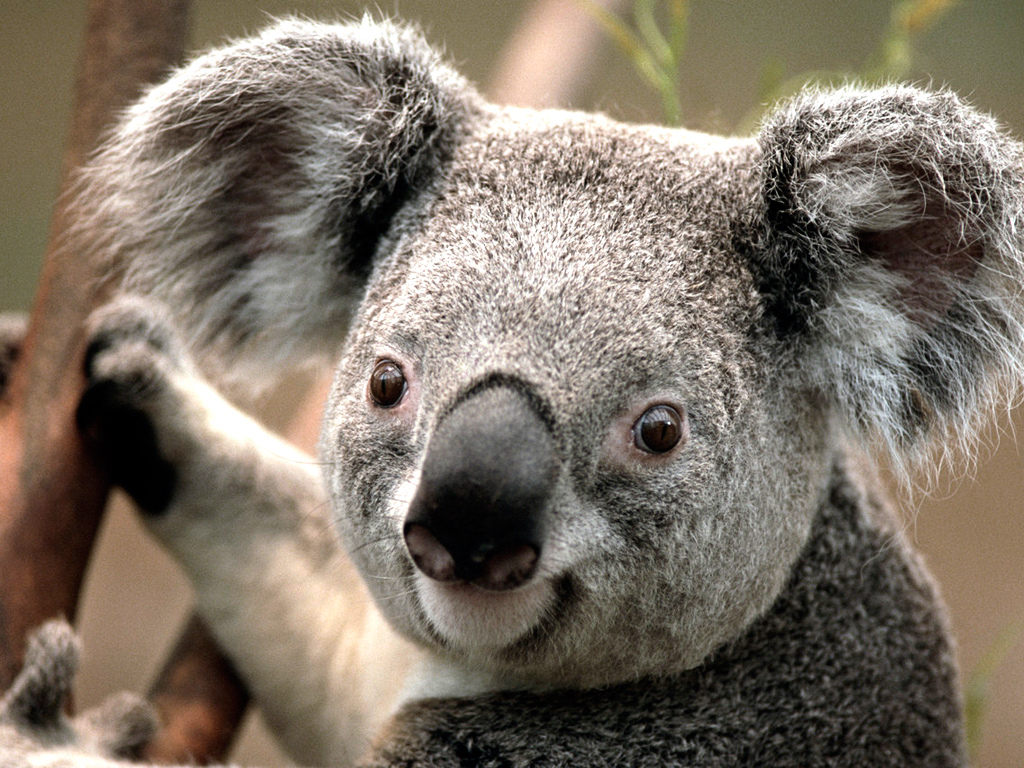 The koala (Phascolarctos cinereus, or, inaccurately, koala bear[a]) is an arboreal herbivorous marsupial native toAustralia. It is the only extant representative of the family Phascolarctidae and its closest living relatives are thewombats. The koala is found in coastal areas of the mainland’s eastern and southern regions, inhabiting Queensland,New South Wales, Victoria, and South Australia. It is easily recognisable by its stout, tailless body and large head with round, fluffy ears and large, spoon-shaped nose. The koala has a body length of 60–85 cm (24–33 in) and weighs 4–15 kg (9–33 lb). Pelage colour ranges from silver grey to chocolate brown. Koalas from the northern populations are typically smaller and lighter in colour than their counterparts further south. These populations possibly are separatesubspecies, but this is disputed.

Koalas typically inhabit open eucalypt woodlands, and the leaves of these trees make up most of their 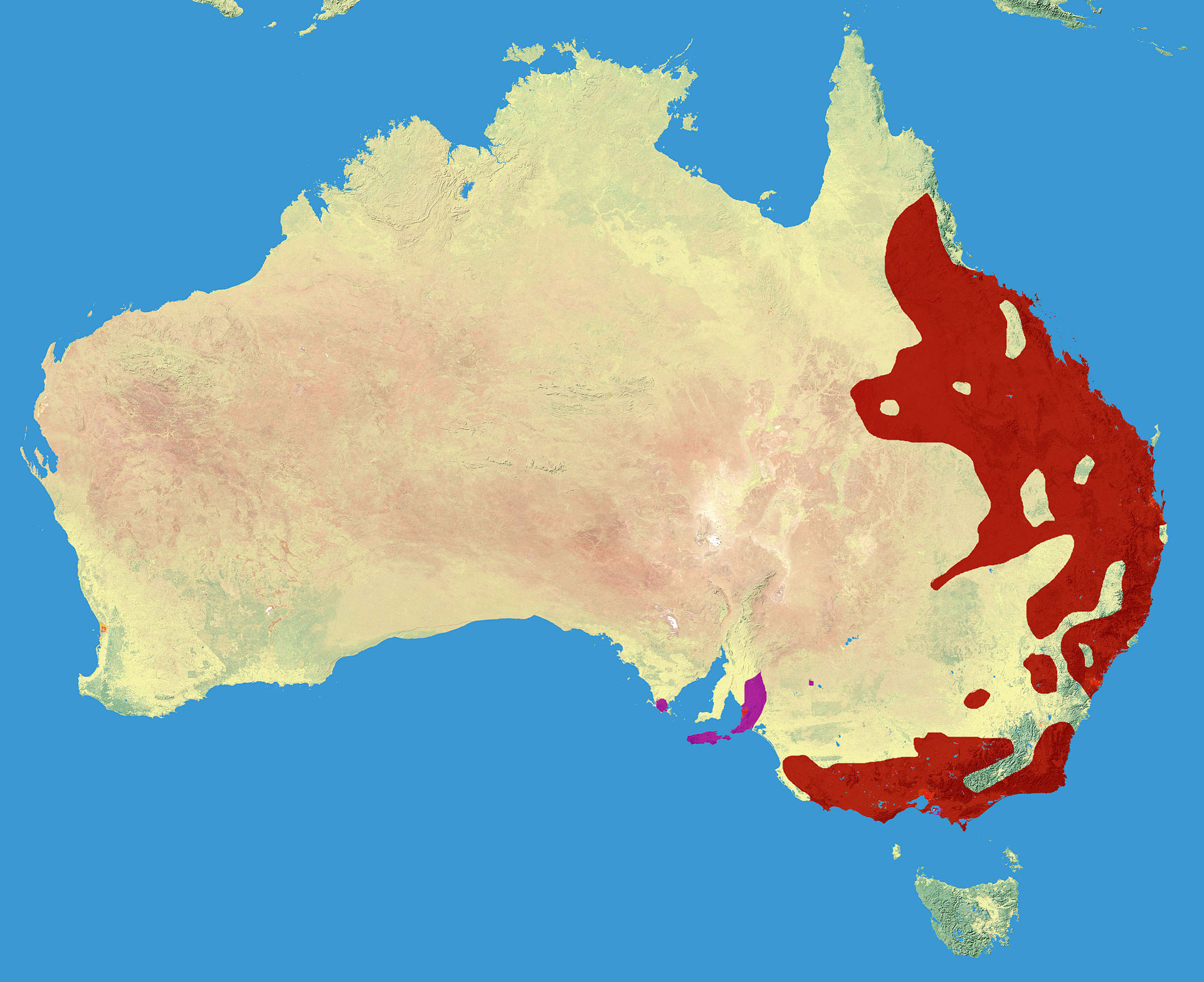 diet. Because this eucalypt diet has limited nutritional and caloric content, koalas are largely sedentary and sleep up to 20 hours a day. They are asocial animals, and bonding exists only between mothers and dependent offspring. Adult males communicatewith loud bellows that intimidate rivals and attract mates. Males mark their presence with secretions from scent glandslocated on their chests. Being marsupials, koalas give birth to underdeveloped young that crawl into their mothers’pouches, where they stay for the first six to seven months of their lives. These young koalas, known as joeys, are fullyweaned around a year old. Koalas have few natural predators and parasites, but are threatened by various pathogens, such as Chlamydiaceae bacteria and the koala retrovirus, as well as by bushfires and droughts.

Koalas were hunted by indigenous Australians and depicted in myths and cave art for millennia. The first recorded encounter between a European and a koala was in 1798, and an image of the animal was published in 1810 by naturalist George Perry. Botanist Robert Brown wrote the first detailed scientific description of the koala in 1814, although his work remained unpublished for 180 years. Popular artist John Gould illustrated and described the koala, introducing the species to the general British public. Further details about the animal’s biology were revealed in the 19th century by several English scientists. Because of its distinctive appearance, the koala is recognised worldwide as asymbol of Australia. Koalas are listed as of Least Concern by the International Union for Conservation of Nature. The Australian government lists populations in Queensland and New South Wales as Vulnerable. The animal was hunted heavily in the early 20th century for its fur, and large-scale cullings in Queensland resulted in a public outcry that initiated a movement to protect the species. Sanctuaries were established, and translocation efforts moved to new regions koalas whose habitat had become fragmented or reduced. The biggest threat to their existence is habitat destruction caused by

The koala is a stocky animal with a large head and vestigial or non-existent tail.[27][28] It has a body length of 60–85 cm (24–33 in) and a weight of 4–15 kg (9–33 lb),[28] making it among the largest arboreal marsupials.[29] Koalas from Victoria are twice as heavy as those from Queensland.[20] The species is sexually dimorphic, with males 50% larger than females. Males are further distinguished from females by their more curved noses[29] and the presence of chest glands, which are visible as hairless patches.[30] As in most marsupials, the male koala has a bifurcated penis, and the female has two lateral vaginasand two separate uteri.[27] The male’s penile sheath contains naturally occurring bacteria that play an important role in fertilisation.[31] The female’s pouch opening is tightened by a sphincter that keeps the young from falling out.[32]

The pelage of the koala is thicker and longer on the back, and shorter on the belly. The ears have thick 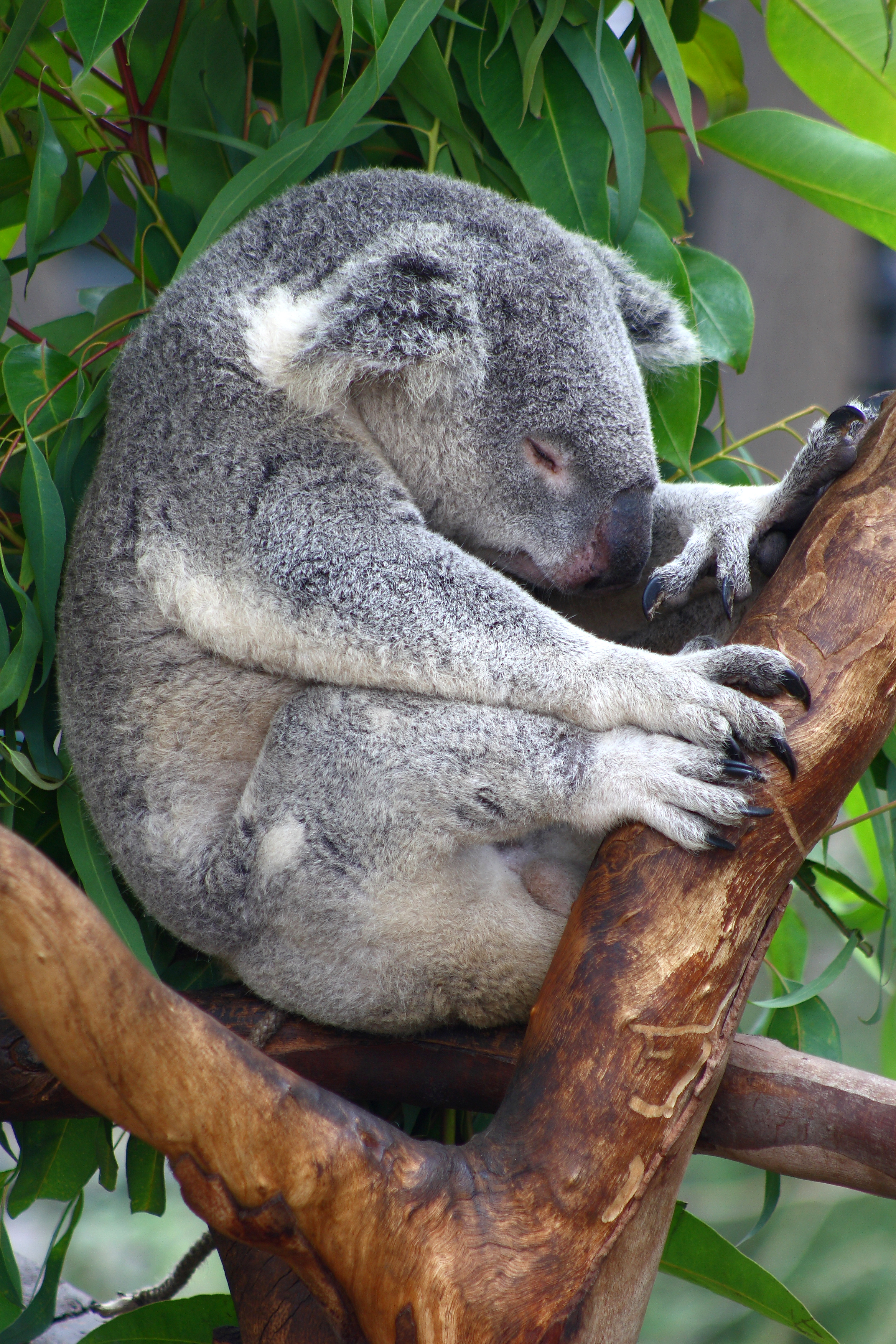 fur on both the inside and outside.[29] The back fur colour varies from light grey to chocolate brown.[27] The belly fur is whitish; on the rump it is dappled whitish, and darker at the back.[28] The koala has the most effective insulating back fur of any marsupial and is highly resilient to wind and rain, while the belly fur can reflect solar radiation.[33] The koala’s curved, sharp claws are well adapted for climbing trees. The large forepaws have two opposable digits (the first and second, which are opposable to the other three) that allow them to grasp small branches. On the hindpaws, the second and third digits are fused, a typical condition for members of the Diprotodontia, and the attached claws (which are still separate) are used for grooming.[34] As in humans and other primates, koalas have friction ridges on their paws.[35] The animal has a sturdy skeleton and a short, muscular upper body with proportionately long upper limbs that contribute to its climbing and grasping abilities. Additional climbing strength is achieved with thigh muscles that attach to the shinbone lower than other animals.[36] The koala has a cartilaginous pad at the end of the spine that may make it more comfortable when it perches in the fork of a tree.[32]

The koala has one of the smallest brains in proportion to body weight of any mammal,[37] being 60% smaller than that of a typical diprotodont, weighing only 19.2 g (0.68 oz).[38] The brain’s surface is fairly smooth, typical for a “primitive” animal.[39] It occupies only 61% of the cranial cavity[37] and is pressed against the inside surface by cerebrospinal fluid. The function of this relatively large amount of fluid is not known, although one possibility is that it acts as a shock absorber, cushioning the brain if the animal falls from a tree.[39]The koala’s small brain size may be an adaptation to the energy restrictions imposed by its diet, which is insufficient to sustain a larger brain.[37] Because of its small brain, the koala has a limited ability to perform complex, unfamiliar behaviours. For example, when presented with plucked leaves on a flat surface, the animal cannot adapt to the change in its