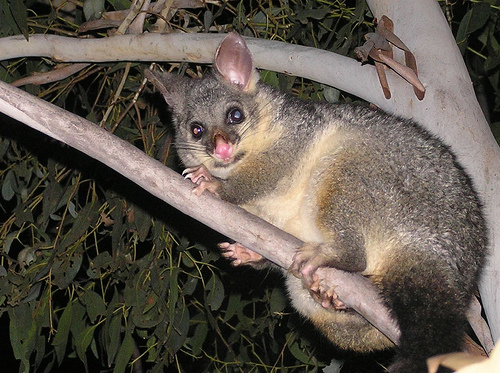 The common brushtail possum has large and pointed ears. It has a bushy tail (hence its name) that is adapted to grasping branches, prehensile at the end with a hairless ventral patch.[5][6] Its forefeet have sharp claws and the first toe of each hind foot is clawless but has a strong grasp.[6] The possum grooms itself with the third and fourth toes which are fused together.[6] It has a thick and woolly pelage that varies in colour depending on the subspecies. Colour patterns tend to be silver-gray, brown, black, red or cream. The ventral areas are typically lighter and the tail is usually brown or black.[5][6] The muzzle is marked with dark patches.

The common brushtail possum has a head and body length of 32–58 cm[5] with a tail length of 24–40 cm.[6] It weighs 1.2-4.5 kg.[6] Males are generally larger than females. In addition, the coat of the male tends to be reddish at the shoulders. As with most marsupials, the female brushtail possum has a forward-opening, well-developed pouch.[5] The chest of both sexes has a scent gland that emits a reddish secretion which stains that fur around it. It marks its territory with these secretions.[7]

The common brushtail possum is perhaps the most widespread marsupial of Australia. It is found throughout the eastern and northern parts of the continent, as well as some western regions, Tasmania and a number of offshore islands, such as Kangaroo Island and Barrow Island.[8][9][10] It is also 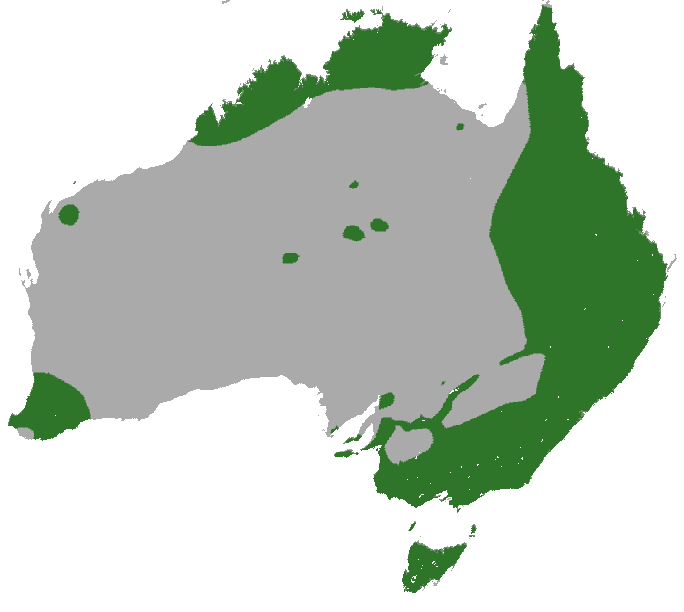 The common brushtail possum can adapt to numerous kinds of vegetation.[12] It prefers Eucalyptus leaves but will also eat flowers, shoots, fruits and seeds.[12] It may also consume animal matter such as insects, birds’ eggs and small vertebrates. Brushtail possums may eat three or four different plant species during a foraging trip, unlike some other arboreal marsupials, such as the koala and the greater glider, which focus on single species. The brushtail possum’s rounded molars cannot cut Eucalyptus leaves as finely as more specialised feeders. They are more adapted to crushing their food which enables them to chew fruit or herbs more effectively. The brushtail possums’ caecum lacks internal ridges and cannot separate coarse and fine particles as efficiently as some other arboreal marsupials.[12] The brushtail possum cannot rely on Eucalyptus alone to provide sufficient nitrogen.[13] Its more generalised and mixed diet, however, does provide adequate nitrogen.[14]

The common brushtail possum is largely arboreal and nocturnal. It has a mostly solitary lifestyle, and individuals keep their distance with scent markings (urinating) and vocalisations. Brushtail possums usually make their dens in natural places like tree hollows and caves but will also use spaces in the roofs of houses. While they sometimes share dens, brushtails normally sleep in separate dens. Individuals from New Zealand use many more den sites than those from Australia.[15] Brushtail possums compete with each other and other animals for den spaces and this contributes to their mortality. This is likely another reason why brushtail possum population densities are smaller in Australia than in New Zealand.[12] Brushtail possums are usually not aggressive towards each other and usually just stare with erect ears.[12] Brushtail possums vocalise with clicks, grunts, hisses, alarm chatters, guttural coughs and screeching.[5][6] 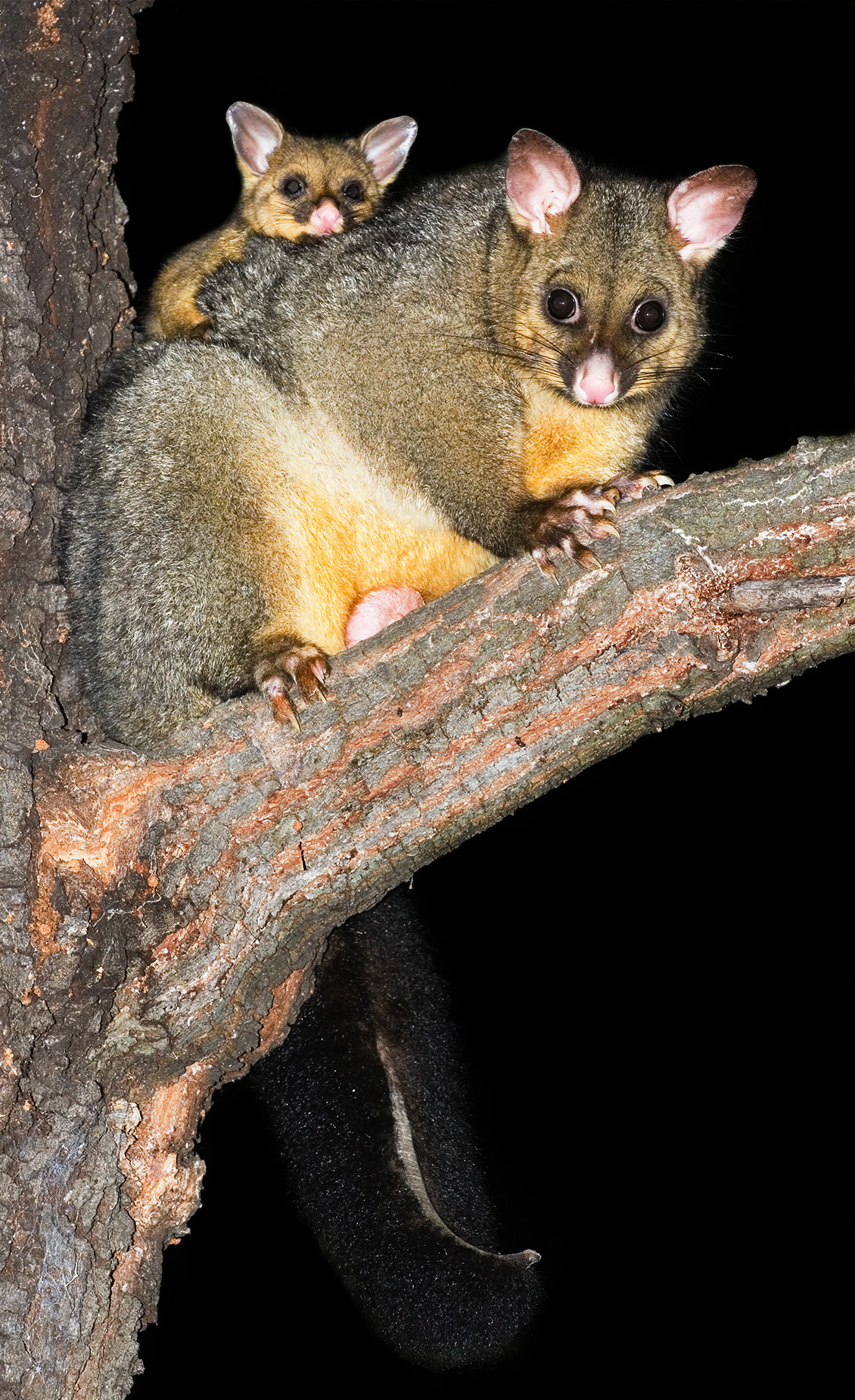 The common brushtail possum can breed at any time of the year, but breeding tends to peak in spring, from September to November, and in autumn, from March to May, in some areas. Mating is promiscuous and random; some males can sire several young in a season while over half sire none.[12] In one Queensland population, it apparently takes the males one month of consorting with females before they can mate with them.[16] Females have a gestation period of 16–18 days, after which they give birth to single young.[5][6] A newborn brushtail possum is only 1.5 cm long and weighs only 2 g. As usual for marsupials, the newborn brushtail possum may climb, unaided, through the female’s fur and into the pouch and attach to a teat. The young develops and remains inside the mother’s pouch for another four or five months. When older, the young is left in the den or rides on its mother’s back until it is seven to nine months old.[5][6] Females reach sexual maturity when they are one year old, and males do so at the end of their second year.[5][6] Female young have a higher survival rate than their male counterparts due to establishing their home ranges closer to their mothers, while males travel farther in search of new nesting sites, encountering pre-established territories from which they may be forcibly ejected. In the Orongorongo population, female young have been found to continue to associate with their mothers after weaning, and some will inherit the prime den sites.[17] There is possible competition between mothers and daughters for dens, and daughters may be excluded from a den occupied by the mother.[18] In forests with shortages of den sites, females apparently produce more sons, which do not compete directly for den sites, while in forests with plentiful den sites, female young are greater in number.[18] Brushtail possums can live up to 13 years in the wild.[5][6]

The common brushtail possum is considered a pest in some areas as it is known to cause damage to pine plantations, regenerating forest, flowers, fruit trees and buildings.

Its fur has been considered valuable and has been harvested. Although once hunted extensively for its fur in Australia, the common brushtail possum is now protected in mainland states, but only partially protected in Tasmania where there is an annual hunting season. In addition, Tasmania gives Crop Protection Permits to landowners whose property has been damaged.[7]

While its populations are declining in some regional areas due to habitat loss, urban populations indicate an adaptation to the presence of humans.[19] In the mainland states, possum trapping is legal when attempting to evict possums from human residences (e.g. roofs), however possums must be released after dusk within 24 hours of capture, no more than 50 metres from the trapping site. In some states e.g. Victoria, trapped possums may be taken to registered veterinarians for euthanasia.[20] In South Australia, they are fully protected and permits are required for trapping possums in human residences[21] or for keeping or rescuing sick or injured wild possums and other native animals.[22]

In New Zealand, where they are an introduced wild species, there are no restrictions on hunting but the population seems to be stable despite the annual killing of the animals in the thousands.[7] In addition, in New Zealand (but not Australia where the disease has been eradicated) it is a host for the highly contagious bovine tuberculosis.[7] The New Zealand Department of Conservation controls possum numbers in many areas via the aerial dropping of highly toxic 1080 (sodium monofluoroacetate) laced bait.[23]