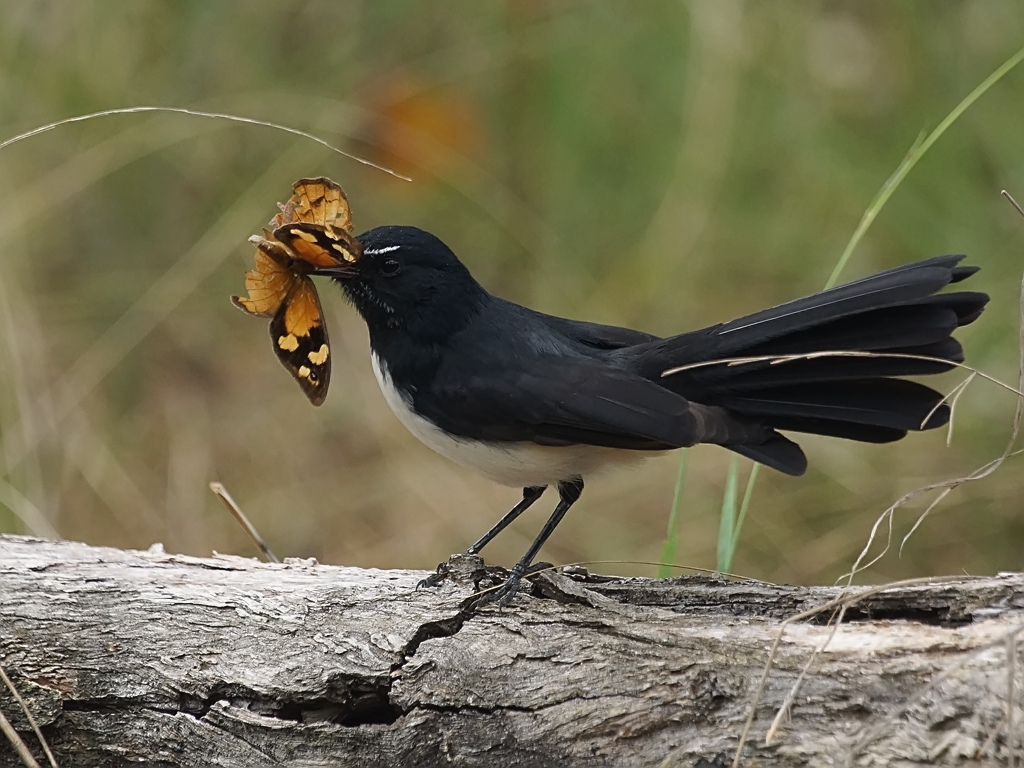 An adult willie wagtail is between 19 and 21.5 cm (7.5–8.5 in) in length and weighs 17–24 g (0.6–0.85 oz), with a tail 10–11 cm (approx 4 in) long. The short, slender bill measures 1.64–1.93 cm (around 0.75 in),[9] and is tipped with a small hook.[27] This species has longer legs than other fantails, which may be an adaptation to foraging on the ground.[28] The male and female have similar plumage; the head, throat, upper breast, wings, upperparts, and tail are all black, with a white eyebrow, “whiskers” and underparts. The bill and legs are black and the iris dark brown. Immature birds in their first year after moulting from juvenile plumage may have pale tips in their wings,[9] while juvenile birds themselves have duller plumage, their upperparts brown-tinged with some pale brown scallops on the head and breast.[29]

The wagtail is very “chatty” and has a number of distinct vocalisations. Its most-recognised sound is its alarm call which is a rapid chit-chit-chit-chit, although it has more melodious sounds in its repertoire. The alarm call is sounded to warn off potential rivals and threats from its territory and also seems to serve as a signal to its mate when a potential threat is in the area. John Gould reported that it sounded like a child’s rattle or “small cog-wheels of a steam mill”.[10] In his book What Bird is That? (1935), Neville Cayley writes that it has “a pleasant call resembling sweet pretty little creature, frequently uttered during the day or night, especially on moonlight nights”.[30] 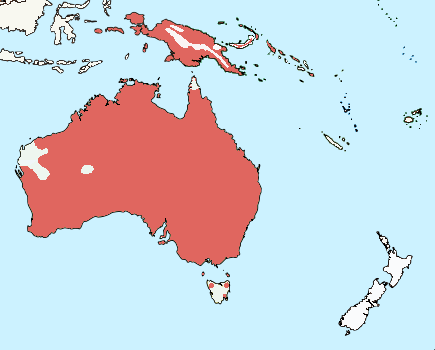 Widespread and abundant, the willie wagtail is found across most of Australia and New Guinea, the Solomon Islands, theBismarck Archipelago, and eastern Indonesia. It is sedentary across most of Australia, though some areas have recorded seasonal movements; it is an autumn and winter visitor to northeastern New South Wales and southeast Queensland, as well as the Gulf Country and parts of Cape York Peninsula in the far north. It is a vagrant to Tasmania,[31] and on occasion reachesLord Howe Island.[32] There is one record from Mangere Island in the Chatham Islands archipelago east of New Zealand in 2002.[33] The willie wagtail was released in Hawaii around 1922 to control insects on livestock, but the introduction was unsuccessful and the last sighting was at Koko Head in 1937.[34]

The willie wagtail is at home in a wide variety of habitats, but avoids densely forested areas such as rainforest. It prefers semi-open woodland or grassland with scattered trees,[9] often near wetlands or bodies of water.[29] In New Guinea, it inhabits man-made clearings and grasslands, as well as open forest and mangroves.[35] On Guadalcanal, it was reported from open areas and coconut groves.[36] It has responded well to human alteration of the landscape and can often be seen hunting in open, grassed areas such as lawns, gardens, parkland, and sporting grounds.[29] The species spread into the Western Australian Wheatbelt after the original vegetation had been cleared for agriculture.[37]

The willie wagtail is almost always on the move and rarely still for more than a few moments during daylight hours. Even while perching it will flick its tail from side to side, twisting about looking for prey. Birds are mostly encountered singly or in pairs,[9]although they may gather in small flocks.[29] Unlike other fantails, much of its time is spent on the ground.[35] It beats its wings deeply in flight, interspersed with a swift flying dip. It characteristically wags its tail upon landing after a short dipping flight.[29]

The willie wagtail is highly territorial and can be quite fearless in defence of its territory; it will harry not only small birds but also much larger species such as the Australian magpie (Cracticus tibicen), raven (Corvus coronoides), laughing kookaburra(Dacelo novaeguineae), or wedge-tailed eagle (Aquila audax).[10] It may even attack domestic dogs, cats and humans which approach its nest too closely. It has also been observed harassing snake-neck turtles and tiger snakes in Western Australia. When harassing an opponent, the willie wagtail avoids the head and aims for the rear.[35] Both the male and female may engage in this behaviour, and generally more intensely in the breeding season. Territories range from 1–3 ha (2.5–7.4 acres) in area.[38] A pair of birds will declare and defend their territory against other pairs in a diving display. One bird remains still while the other loops and dives repeatedly before the roles are reversed; both sing all the while.[38]

The bird’s white eyebrows become flared and more prominent in an aggressive display, and settled and more hidden when in a submissive or appeasement display.[39]

The willie wagtail perches on low branches, fences, posts, and the like, watching for insects and other small invertebrates in the air or on the ground. It usually hunts by hawking flying insects such as gnats, flies, and small moths, but will occasionallyglean from the ground. It will often hop along the ground and flit behind people and animals, such as cattle, sheep or horses, as they walk over grassed areas, to catch any creatures disturbed by their passing.[6] It wags its tail in a horizontal fashion while foraging in this manner; the exact purpose of this behaviour is unknown but is thought to help flush out insects hidden in vegetation and hence make them easier to catch.[40] The willie wagtail takes ticks from the skin of grazing animals such as cattle or pigs, even from lions asleep in a zoo.[41] It kills its prey by bashing it against a hard surface, or holding it and pulling off the wings before extracting the edible insides.[42]

The adaptability and opportunistic diet of the willie wagtail have probably assisted it in adapting to human habitation; it eats a wide variety of arthropods, including butterflies, moths, flies, beetles, dragonflies, bugs, spiders, centipedes, and millipedes,[43]and has been recorded killing small lizards such as skinks and geckos in a study in Madang on Papua New Guinea’s north coast.[44] The tailbones of these lizards have been found in their faeces although it is unclear whether the whole animal was eaten or merely the tail. Either way, lizards are only a very occasional prey item forming between 1 and 3% of the total diet.[44] Evidence from the study in Madang suggested that the willie wagtail selectively fed nestlings larger prey.[44] 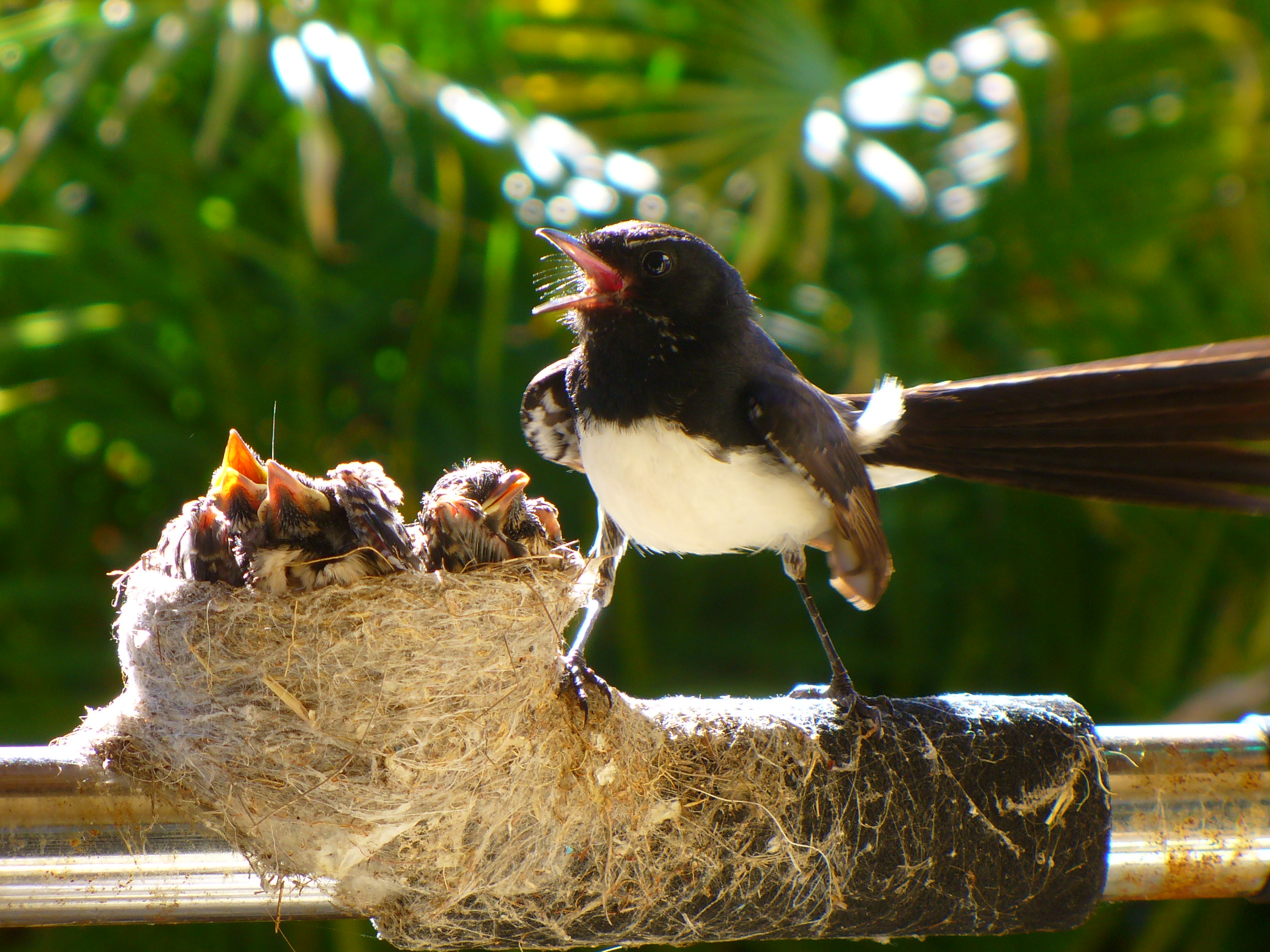 Willie wagtails usually pair for life. The breeding season lasts from July to December, more often occurring after rain in drier regions. Anywhere up to four broods may be raised during this time. It builds a cup-like nest on a tree branch away from leaves or cover, less than 5 m (16 ft) above the ground. Rafters and eaves may also be used. It has been observed to build its nest in the vicinity of those of the magpie-lark (Grallina cyanoleuca), possibly taking advantage of the latter bird’s territoriality and aggression toward intruders. Similarly, it is not afraid to build near human habitation.[39]

The nest consists of grass stems, strips of bark, and other fibrous material which is bound and woven together with spider web. Even hair from pet dogs and cats may be used.[39] It has also been observed attempting to take hair from a pet goat. An alpaca breeder in the Mudgee District of New South Wales has observed alpaca fleece in the nests of willy wagtails (the results of scraps of fleece not picked up at shearing time). The female lays two to four small cream-white eggs with brownish markings measuring 16 mm × 21 mm (0.63 in × 0.83 in),[45] and incubates them for 14 days.[46] Like all passerines, the chicks are altricial and nidicolous; they are born naked and helpless with closed eyes, and remain in the nest.[47] Both parents take part in feeding the young,[48][49] and may continue to do so while embarking on another brood.[50] Nestlings remain in the nest for around 14 days before fledging.[46] Upon leaving, the fledglings will remain hidden in cover nearby for one or two days before venturing further afield, up to 20 m (60 ft) away by the third day. Parents will stop feeding their fledglings near the end of the second week, as the young birds increasingly forage for themselves, and soon afterwards drive them out of the territory.[51]

Although the willie wagtail is an aggressive defender of its nest, predators do account for many eggs and young. About two thirds of eggs hatch successfully, and a third leave the nest as fledglings. Nestlings may be preyed upon by both pied butcherbirds, (Cracticus nigrogularis) black butcherbirds (C. quoyi), the spangled drongo(Dicrurus bracteatus), and the pied currawong (Strepera graculina), as well as the feral cat (Felis catus), and rat species. The proximity of nesting to human habitation has also left nests open to destruction by children.[51]

Although generally a peaceful bird, which lives quite happily alongside humans, the willie wagtail will defend its nest aggressively. Willie wagtails are known to swoop at passers by, much like the Australian magpie. While attacks from willie wagtails are not as common or as formidable as the magpie, they do come as a great shock to recipients.