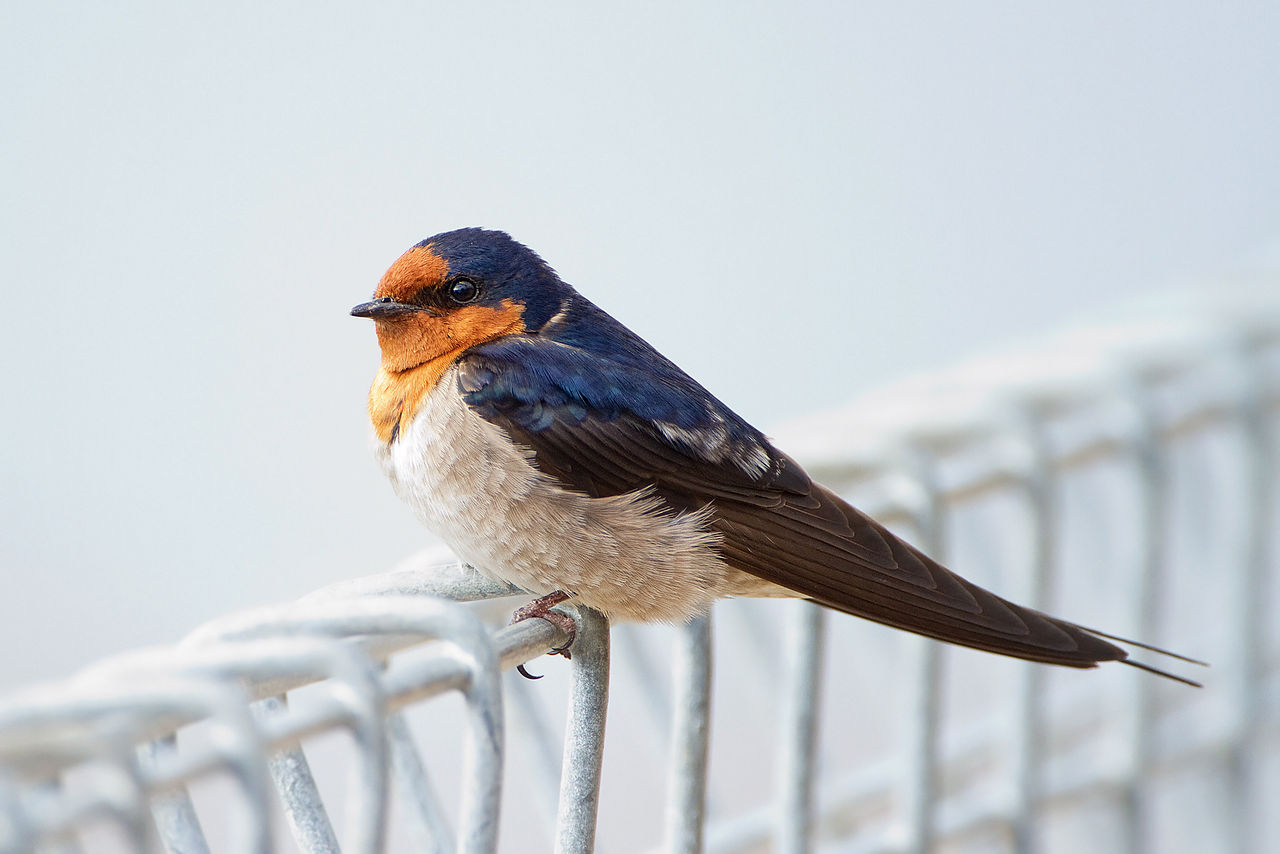 The welcome swallow (Hirundo neoxena) is a small passerine bird in the swallow family.

It is a species native to Australia and nearby islands, and self-introduced into New Zealand in the middle of the twentieth century.[2] It is very similar to the Pacific swallow with which it is often considered conspecific.

This species breeds in southern and eastern Australia in a variety of habitats, mostly in open areas, man made clearings or urban environments, but not desert or dense forest.[3] Eastern populations are largely migratory, wintering in northern Australia. Western birds and those in New Zealand are mainly sedentary.

The welcome swallow is a small size bird and is fast-flying. Their flying style is circular in pattern with swift darting motions. They have graceful shape and flight, moreover they often fly singly, in couples or in clusters.[7] The welcome swallow is metallic blue-black above, light grey below on the breast and belly, and rusty on the forehead, throat and upper breast. It has a long forked tail, with a row of white spots on the individual feathers. These birds are about 15 cm (5.9 in) long, including the outer tail feathers which are slightly shorter in the female. The welcome swallow’s weight is about 9-20g. From the Gould collection in Tasmania a “natural size” male had a wing size of 11.1 cm, tail size of 7.4 cm, and a culmen of 0.7 cm. While the female has 10.9 cm wings, a 6.25 cm tail, and a culmen of 0.7 cm.[8] The call is a mixture of twittering and soft warbling notes, and a sharp whistle in alarm. However, their call is normally quiet and does not carry very far.[7]

Young welcome swallows are buffy white, instead of rufous, on the forehead and throat, and have shorter tail streamers.

The winter range in northern Australia overlaps with that of wintering barn swallow (Hirundo rustica), but the latter is readily separable by its blue breast band.[9]Welcome swallows readily breed close to human habitation. Swallows are a commonly found on wires, posts and other perches.[10]

The welcome swallow is a self-introduced species from Australia that is believed to have flown over to New Zealand in the early 1900s.[7] The welcome swallow is found throughout most parts of New Zealand, but are very rare in Fiordland.[7] The shape of New Zealand is narrow and long, which helped the birds to easily get to areas near water. They are also on Chatham and Kermadec Islands and in some instances have been seen on Campbell Island, Auckland Island and the Snares.[7]

Although the swallows are more often near coastal and wetland areas, they can live in almost all types of habitat except alpine areas and very dense forest.[7] The welcome swallow has been documented as being seen in open areas such as farmlands, grasslands, partly cleared areas that are wooded, lands associated with bodies of water such as lakes or reservoirs, and along the coast lines.[12] This species is well adapted for urban and suburban life as well, it is even able to live in high altitude areas due to the provision of nesting materials provided by humans.[12] During winter, the swallows will move to the warmer habitat which can provide them enough food and safe shelters.[13]

The welcome swallow once it reaches maturity has a long breeding period. These swallows have a monogamous social structure and a breeding period that lasts from August until March.[7] The nest is an open cup of mud and grass, made by both sexes, and is attached to a structure, such as a vertical 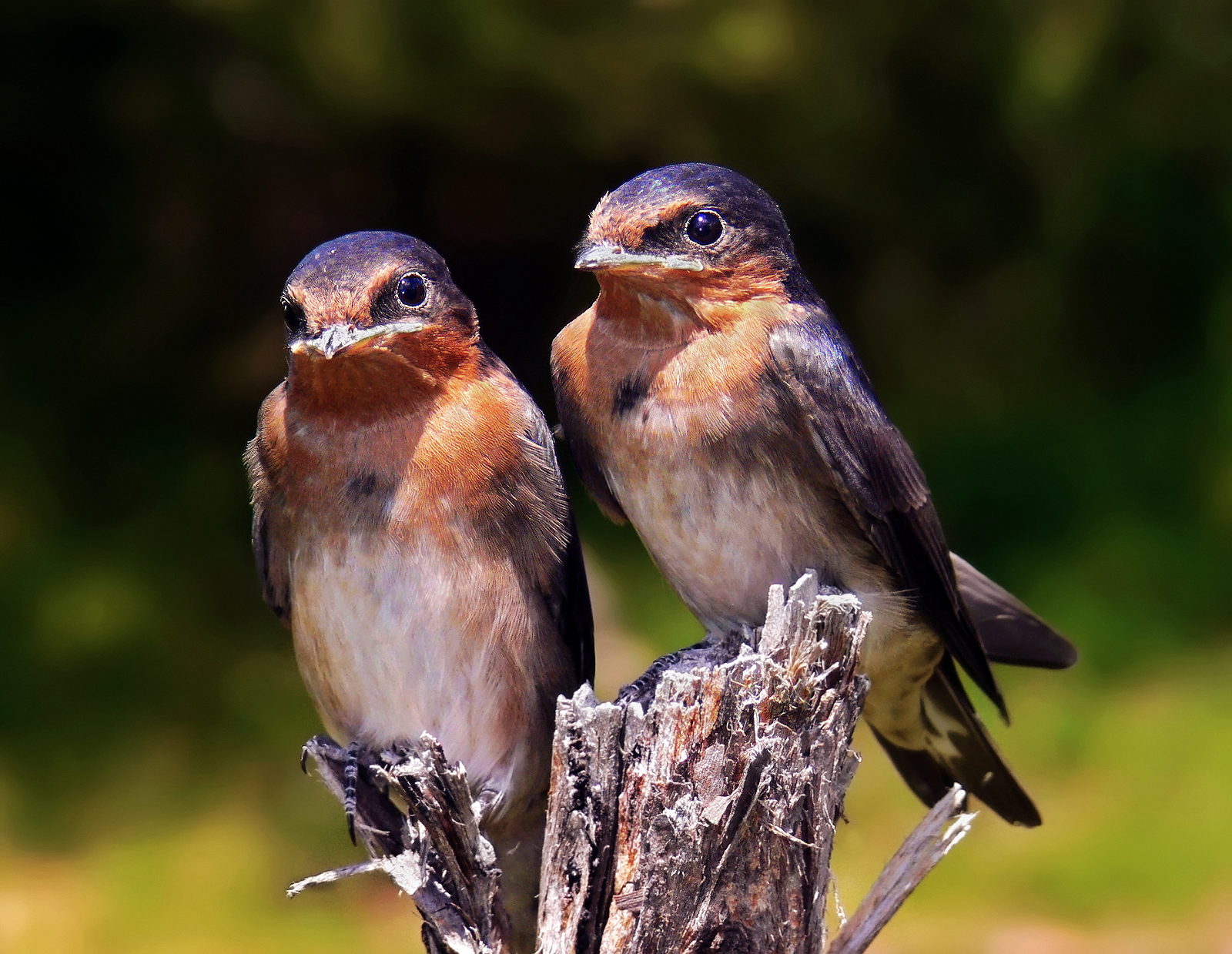 rock wall or building. It is lined with feathers and fur, and three to five eggs are laid. Two broods are often raised in a season.The nest height ranges from 0.5 metres to 13.5 metres.[7] One particular study showed that the nests that were the highest tended to have a higher fledgling success rate possibly due to the inability of mammals to access the nests.[14] Nesting sites can be a variety of areas and have been documented to be from urban and suburban areas to rural areas. Buildings, moveable boats and ferries, hollowed out trees, caves and cliffs, mine tunnels and shafts, as well as underground water tanks have all been observed areas of nesting swallows.[12] Swallows build the cup-shape nests connecting to vertical rock walls or buildings to avoid sunlight.[11] Nests on average take 8–23 days to build, and are often re-used for consecutive years of breeding. Swallows often go back to their old nests for the next year to breed.[13] Welcome Swallows always work as a flock. When breeding, they usually work in pairs but often small loose groups to protect their nest and territory especially against predatory birds.[7] The number of successful broods can vary year to year, however the maximum number of broods recorded is three. Each brood or clutch can range from two to seven eggs with an average of four.[7] However, during the beginning of a breeding season clutch sizes have been known to be bigger, where towards the end of breeding season clutch sizes may be smaller.[15] Eggs are generally lain in twenty-four- to forty-eight-hour intervals, however, one nest can have multiple clutches because the parent pair may abandon a nest if the clutch size is too small and then another pair will lay their eggs within that same nest.[12] Eggs are generally 18 mm in length and 13mm in width with a pink colour and brown speckles.[7] Male welcome swallows do not participate in the incubation of the eggs. Rather they forage while the female incubates, and when the female forages either watches the nest for a short period or accompanies the female in foraging.[15]

The female alone incubates the eggs, which hatch after two to three weeks. The young are fed by both parents, and leave the nest after a further two to three weeks. Males have been known to remove faecal sacks after coaxing the cloaca of the young to dispose of them as well.[15] The fledglings stay in the nest from 18 to 23 days and become completely independent around 35 days. However, they don’t start breeding until 8 months to 14 months of age.[7] Although the swallows are monogamous more than just the breeding pair may take care of the young. Also, many swallows may live within the nest like during non-breeding periods where colonies will roost together in large numbers.[7] Welcome swallows are good indicators of temperature, as the temperature drops lower, the less likely a swallow will be observed in the South. When swallows are around, the temperature usually does not drop below -2/-3 degree Celsius.[7] Migration may occur during non-breeding seasons for larger more reliable food sources. These distance may be quite large as well during winter when food is not readily available.[7] Individuals in this species have been known to live up to 6 years creating up to three broods a year during breeding season.[7]

These birds are extremely agile fliers, which feed on insects while in flight. They often fly fast and low to the ground on open fields in large circles or figure eight patterns. They will often swoop around animals or people in the open. Males and females tend to forage together during breeding season even with fledglings within the nest.[15] Welcome swallows do show a habit of drinking water while flying, they do this by scooping water within their bills from lake and pond surfaces.[7] This is because welcome swallows need to drink water frequently, which allows it to catch insects in the water as well.[7] Welcome swallows also can cooperate with other birds or companions to drive the insects together.[11] It can remember the insects’ activity routines to make its foraging be more efficient.

The hawk, snake, mink and wild cat are the main predators that hunt welcome swallows.[16] Especially in Australia, the snakes are the most dangerous predators for the birds. Snakes can climb trees to reach the nests and eat the eggs or young birds. According to one New Zealand study the only time a nest failed was from disturbing the nest during the incubation period, these instances were from humans, mammals such as mustelids, and black birds preying upon the eggs.[15] In swallow’s excreta, there are various kinds of bacteria and parasites.[13] The nests tend to breed all kinds of bacteria and parasites causing very severe diseases, for example: histoplasmosis, encephalitis, salmonella, meningitis, toxoplasmosis, etc. Hatchlings depend on maternal antibodies and immunity provided by the yolk sac within the egg.[17] Although no specific parasites were found, swallows are known as colonial breeders and are at a high risk for parasites, which may be a cause of lower breeding success but an increase in immune responsiveness.[17] Another disease that not only effects the poultry business, but also the welcome swallow is fowlpox.[18] This virus has two forms cutaneous (mild harm) and diphtheritic (deadly), poultry is usually vaccinated for the virus, but wildlife is not.[18]

The European swallows are regarded highly among ancient Greeks; they even held a festival to celebrate its arrival for each spring, since swallows are indicator of the incoming spring season. “One swallow does not a summer make”, is a pretty near literal translation of an ancient Greek proverb. In the ancient world, these birds are strongly interwoven with the narratives of household gods and are regarded as a presence of fortune. Conversely, harms or danger created upon welcome swallows are believed to bring evil into the household.[7]