by Nature Mates on September 24, 2015 in Birds, Cockatoos & cockatiels 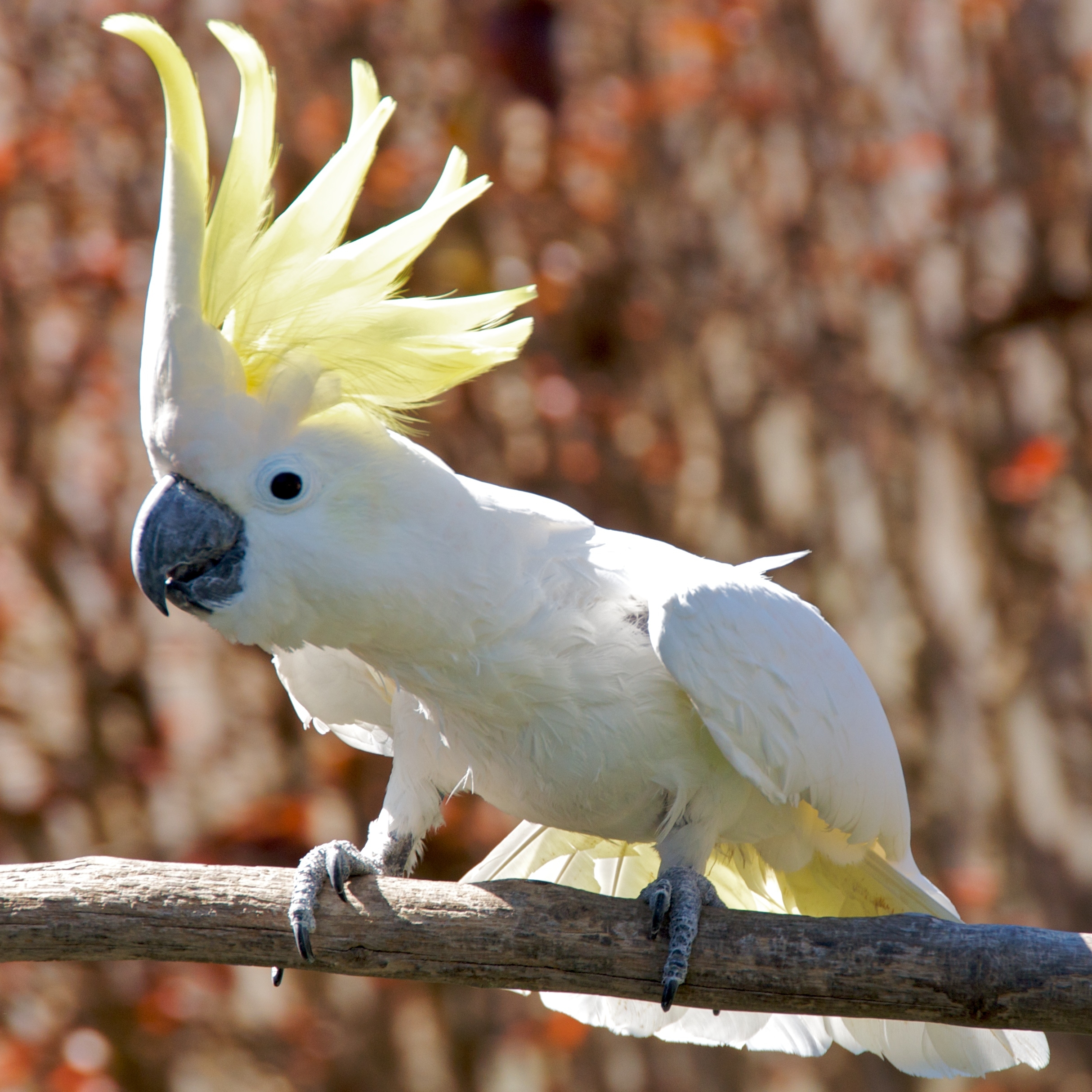 The sulphur-crested cockatoo (Cacatua galerita) is a relatively large white cockatoo found in wooded habitats in Australiaand New Guinea and some of the islands of Indonesia. They can be locally very numerous, leading to them sometimes being considered pests. They are well known in aviculture, although they can be demanding pets.

It has a total length of 44–55 cm (17–22 in), with the Australian subspecies larger than subspecies from New Guinea and nearby islands. The plumage is overall white, while the underwing and -tail are tinged yellow. The expressive crest is yellow. The bill is black, the legs are grey, and the eye-ring is whitish. Males typically have almost black eyes, whereas the females have a more red or brown eye, but this requires optimum viewing conditions to be seen. The differences between the subspecies are subtle. C. g. fitzroyi is similar to the nominate race but lacks the yellow on the ear tufts and has slightly blueish skin around the eye. C. g. eleonora is similar to C. g. fitzroyi but is smaller and has broader feathers in the crest, andC. g. triton is similar to C. g. eleonora except it has a smaller bill.[2]

It is similar in appearance to the three species of corellas found in Australia. However, corellas are smaller, lack the prominent yellow crest and have pale bills. In captivity, the sulphur-crested cockatoo is easily confused with the smalleryellow-crested cockatoo or the blue-eyed cockatoo with a differently shaped crest and a darker blue eye-ring. 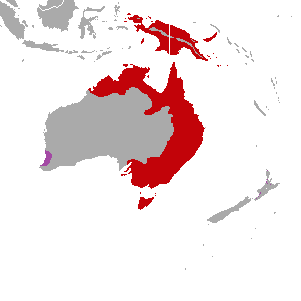 In Australia, sulphur-crested cockatoos can be found widely in the north and east, ranging from the Kimberley to as far south as Tasmania, but avoiding arid inland areas with few trees. They are numerous in suburban habitats in cities such asAdelaide, Melbourne, Canberra, Sydney and Brisbane. Except for highland areas, they occur throughout most of New Guineaand on nearby smaller islands such as Waigeo, Misool and Aru, and various islands in the Cenderawasih Bay and Milne Bay.

There are four recognised subspecies;

Their distinctive raucous call can be very loud; it is adapted to travel through the forest environments in which they live, including tropical and subtropical rainforests. These birds are naturally curious, as well as very intelligent. They have adapted very well to European settlement in Australia and live in many urban areas. 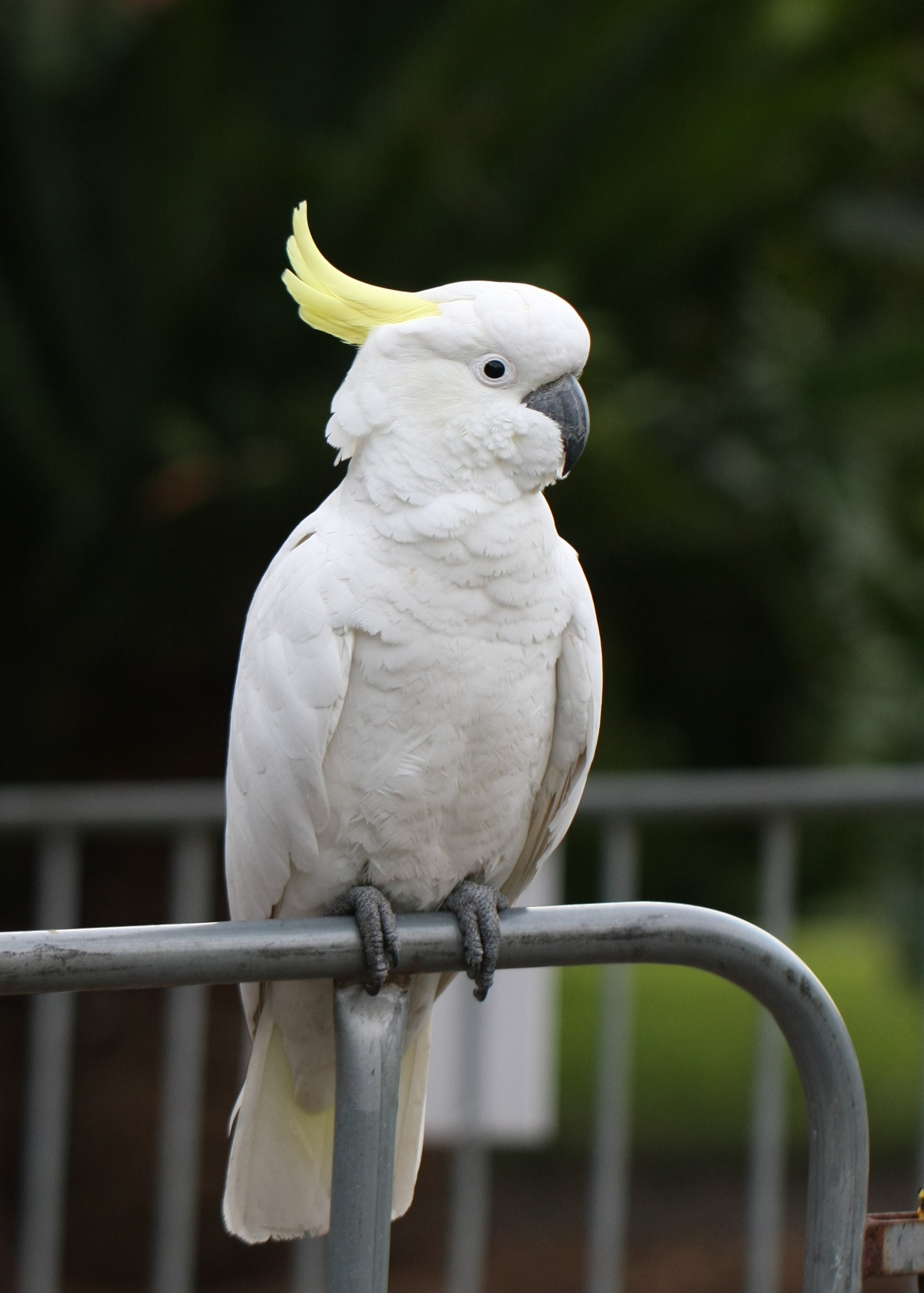 These birds are very long-lived, and can live upwards of 70 years in captivity,[3][4]although they only live to about 20–40 years in the wild. They have been known to engage in geophagy, the process of eating clay to detoxify their food. These birds produce a very fine powder to waterproof themselves instead of oil as many other birds do.

The sulphur-crested cockatoo is a seasonal breeder in Australia, little is known about its breeding behaviour in New Guinea. In southern Australia the breeding season is from August to January, whereas in northern Australia the season is from May to September.[2] The nest is a bed of wood chips in a hollow in a tree. Like many other parrots it competes with others of its species and with other species for nesting sites.[5] Two to three eggs are laid and incubation lasts between 25–27 days. Both parents incubate the eggs and raise the nestlings. The nestling period is between 9 to 12 weeks, and the young fledglings remain with their parents for a number of months after fledging.[2]

A 2009 study involving an Eleonora cockatoo (the subspecies Cacatua galerita eleonora) named Snowball found that sulphur-crested cockatoos are capable of synchronising movements to a musical beat.[6]

Species that feed on the ground are very vulnerable to predator attack. The cockatoo has evolved a behavioural adaptation to protect against this: whenever there is a flock on the ground, there is at least one high up in a tree (usually a dead tree), keeping guard. This is so well known that it has even entered Australian slang: a person keeping guard for sudden police raids on illegal gambling gatherings is referred to as a cockatoo or cocky for short.[7]

In some parts of Australia, the sulphur-crested cockatoo can be very numerous, and may cause damage to cereal and fruit crops, newly planted tree seedling, and soft timber on houses and outdoor furniture.[8] Consequently, they are sometimes shot or poisoned as pests. Government permit is required, as they are a protected species under the Australian Commonwealth Law.

Sulphur-crested cockatoos may no longer be imported into the United States as a result of the Wild Bird Conservation Act (WBCA).[9] However, they have been bred in captivity. They are demanding pets, being very loud and having a natural desire to chew wood and other hard and organic materials.

One cockatoo called Fred was still alive at 100 years of age in 2014.[10] Cocky Bennett of Tom Ugly’s Point in Sydney was a celebrated sulphur-crested cockatoo who reached an age of 100 years or more. He had lost his feathers and was naked for much of his life, and died in the early years of the twentieth century. His body was stuffed and preserved after death.[11] Another ‘cocky’, born in 1921 and residing in Arncliffe with his owner Charlie Knighton, was 76 years old in the late 1990s.[3]

Sulphur-crested cockatoos, along with many other parrots, are susceptible to psittacine beak and feather disease, a viral disease, which causes birds to lose their feathers and grow grotesquely shaped beaks. The disease occurs naturally in the wild,[12] and in captivity.[13]