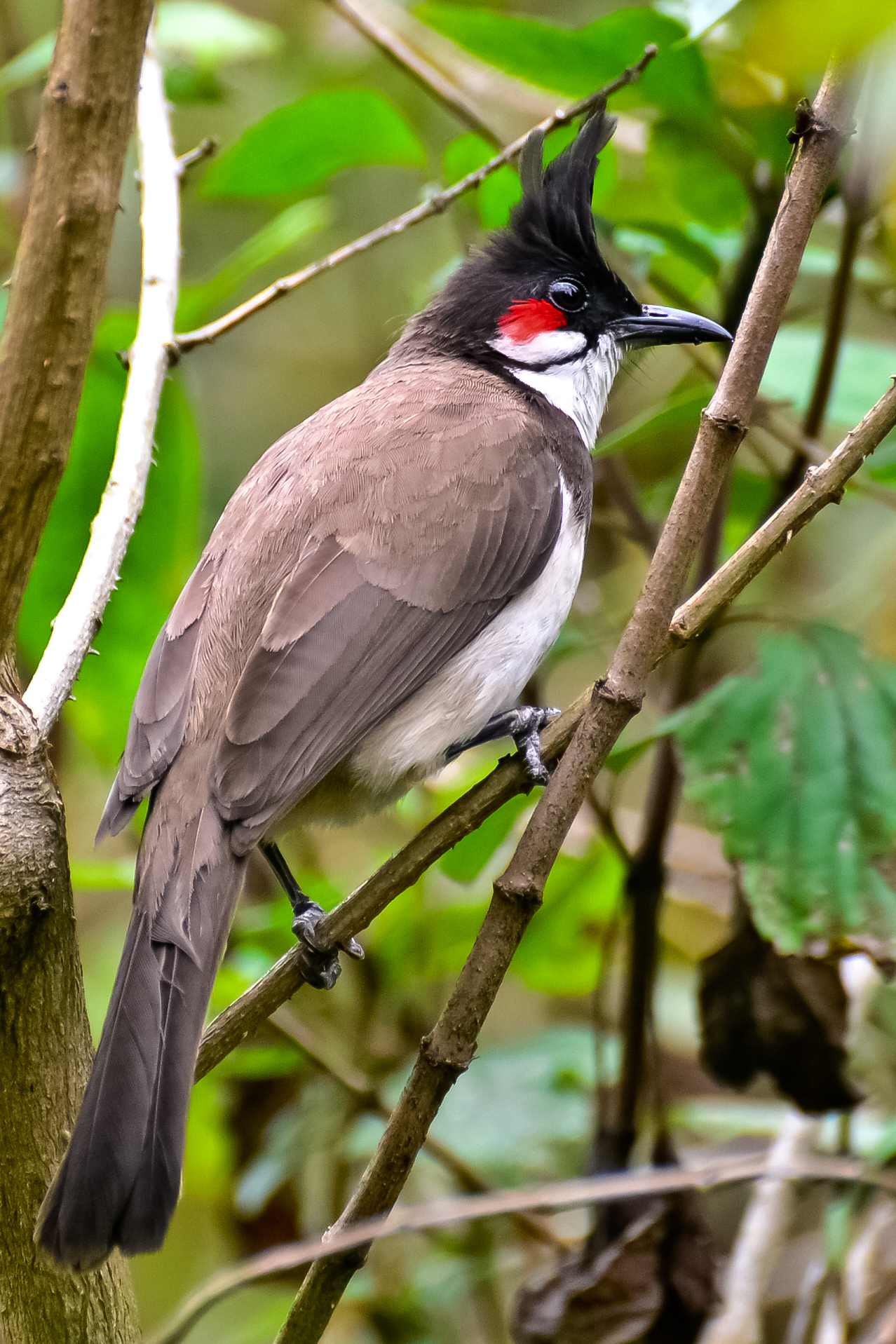 The red-whiskered bulbul (Pycnonotus jocosus) is a passerine bird found in Asia. It is a member of the bulbul family. It is a resident frugivore found mainly in tropical Asia. It has been introduced in many tropical areas of the world where populations have established themselves. It feeds on fruits and small insects and they conspicuously perch on trees and their calls are a loud three or four note call. They are very common in hill forests and urban gardens within its range.

The red-whiskered bulbul is about 20 centimetres (7.9 in) in length. It has brown upper-parts and whitish underparts with buff flanks and a dark spur running onto the breast at shoulder level. It has a tall pointed black crest, red face patch and thin black moustachial line. The tail is long and brown with white terminal feather tips, but the vent area is red.

The loud and evocative call is a sharp kink-a-joo (also transcribed as pettigrew or kick-pettigrew or pleased to meet you[3]) and the song is a scolding chatter. It is more often heard than seen, but will often perch conspicuously especially in the mornings when they call from the tops of trees. The life span is about 11 years.[9]

This is a bird of lightly wooded areas, more open country with bushes and shrubs, and farmland. Irruptions have been noted from early times with Thomas C. Jerdon noting that they “periodically visiting Madras and other wooded towns in large flocks.”[2]

It has established itself in Australia, Los Angeles, Hawaii,[13] and Florida[14] in the United States, and in the Mauritius, Assumption Island[15] and Mascarene Islands.[16][17] In Florida, it is only found in a small area, and its population could be extirpated easily.[18]

The red-whiskered bulbul was introduced by the Zoological and Acclimatization Society in 1880 to Sydney, and became well established across the suburbs by 1920, and continued to spread slowly to around 100 km away. It is now also found in suburban Melbourne and Adelaide, although it is unclear how they got there.[19] 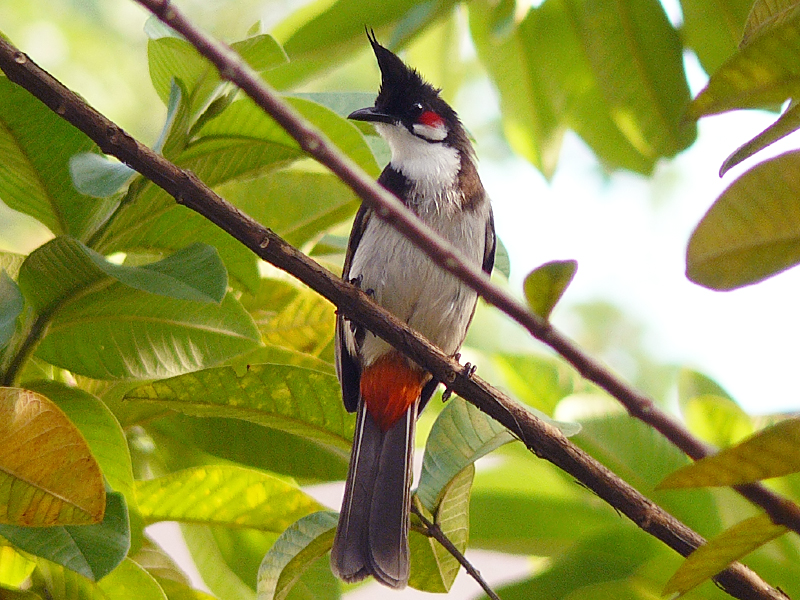 The red-whiskered bulbul feeds on fruits (including those of Cascabela thevetia that are toxic to mammals), nectar and insects.[20]

The breeding season is spread out and peaks from December to May in southern India and March to October in northern India.[4]Breeding may occur once or twice a year.[21] The courtship display of the male involves head bowing, spreading the tail and drooping wings.[21] The nest is cup-shaped, and is built on bushes, thatched walls or small trees. It is woven of fine twigs, roots, and grasses, and embellished with large objects such as bark strips, paper, or plastic bags.[18] Clutches typically contain two to three eggs.[21] Adults (possibly the female[3]) may feign injury to distract potential predators away from the nest.[21][22] The eggs have a pale mauve ground colour with speckles becoming blotches towards the broad end. Eggs measure 21 mm and are 16 mm wide.[23] Eggs take 12 days to hatch. Both parents take part in raising the young. Young birds are fed on caterpillars and insects which are replaced by fruits and berries as they mature.[3] The chicks are psilopaedic (having down only in the pterylae).[7] Eggs and chicks may be preyed on by the greater coucal, Calotes versicolor, and crows.[3]

On the island of Réunion, this species established itself and also aided the spread of alien plant species such as Rubus alceifolius. In Florida they feed on fruits and berries of as many as 24 exotic plants including loquat (Eriobotrya japonica), Lantana spp., Brazilian pepper (Schinus terebinthifolius) and figs (Ficus).[27] In Mauritius they aid the dispersal of Ligustrum robustum and Clidemia hirta. Seeds that pass through their gut germinate better.[28] Populations of the red-whiskered bulbul on the island of Reunion have diversified in the course of thirty years and show visible variations in bill morphology according to the food resources that they have adapted to utilize.[29]

This species was once a popular cage bird in parts of India. C. W. Smith noted[30] that These birds are in great request among the natives, being of a fearless disposition, and easily reclaimed. They are taught to sit on the hand, and numbers may thus be seen in any Indian bazaar.

The species continues to be a popular cagebird in parts of Southeast Asia.[16]