The red wattlebird (Anthochaera carunculata) is a honeyeater native to southern Australia. It is a large, around 35 cm (14 in) in length, grey-brown honeyeater with red eyes, distinctive pinkish-red wattles either side of the neck and white streaks on the chest and belly, which reveals a bright yellow patch towards the tail. The sexes are similar in plumage. Juveniles have less prominent wattles and browner eyes. The species is found in southeast Queensland, New South Wales, Victoria, South Australia and southwest Western Australia in open forest, woodland, and near human habitation.

The sexes of the red wattlebird are similar in size and plumage, the length of the adult male ranging from 33 to 37 cm (13.0 to 14.6 in) and adult female 34 to 37 cm (13.4 to 14.6 in).[16] The crown, forehead and upper lores are dark brown, streaked with pale brown on the forecrown and white on the hindcrown. The nape is slightly paler brown.with white streaks. A whitish triangular marking covers the lower lores and anterior ear coverts, bordered below by a dark brown stripe from the lower mandible down to the wattle and around to behind the eye. The throat is dark brown streaked with white.[18] The eyes are red, and there are distinctive pinkish-red wattles either side of the neck dangling from the lower rear corner of ear-coverts as well as a sliver of pink bare skin at the lower border of the white facial marking.[16] The chest and belly are streaked white, and there is a bright yellow patch towards the tail.[19] The downward-curving bill is black and the strong legs and feet are pink or pinkish-brown.[20] Juveniles are generally less flamboyant, with less prominent wattles and browner eyes.[19] In common with other honeyeaters, the red wattlebird has a long specialized tongue to extract nectar from flowers.[21] The tongue can extend well beyond the tip of the bill and is divided at the end to form a brush-like structure with over a hundred bristles that soak up nectar by capillary action.[22]

The red wattlebird is hard to confuse with any other species, though in poor visibility might be mistaken for the spiny-cheeked honeyeater, or little or western wattlebirds.[16]

They are noisy birds that produce a range of raucous calls. Pairs of birds appear to duet, particularly at food sources, with the male producing a loud cackle and the female a whistling call.[19]

The red wattlebird is found in southeast Queensland, where it occurs south of Noosa and Cooloola, 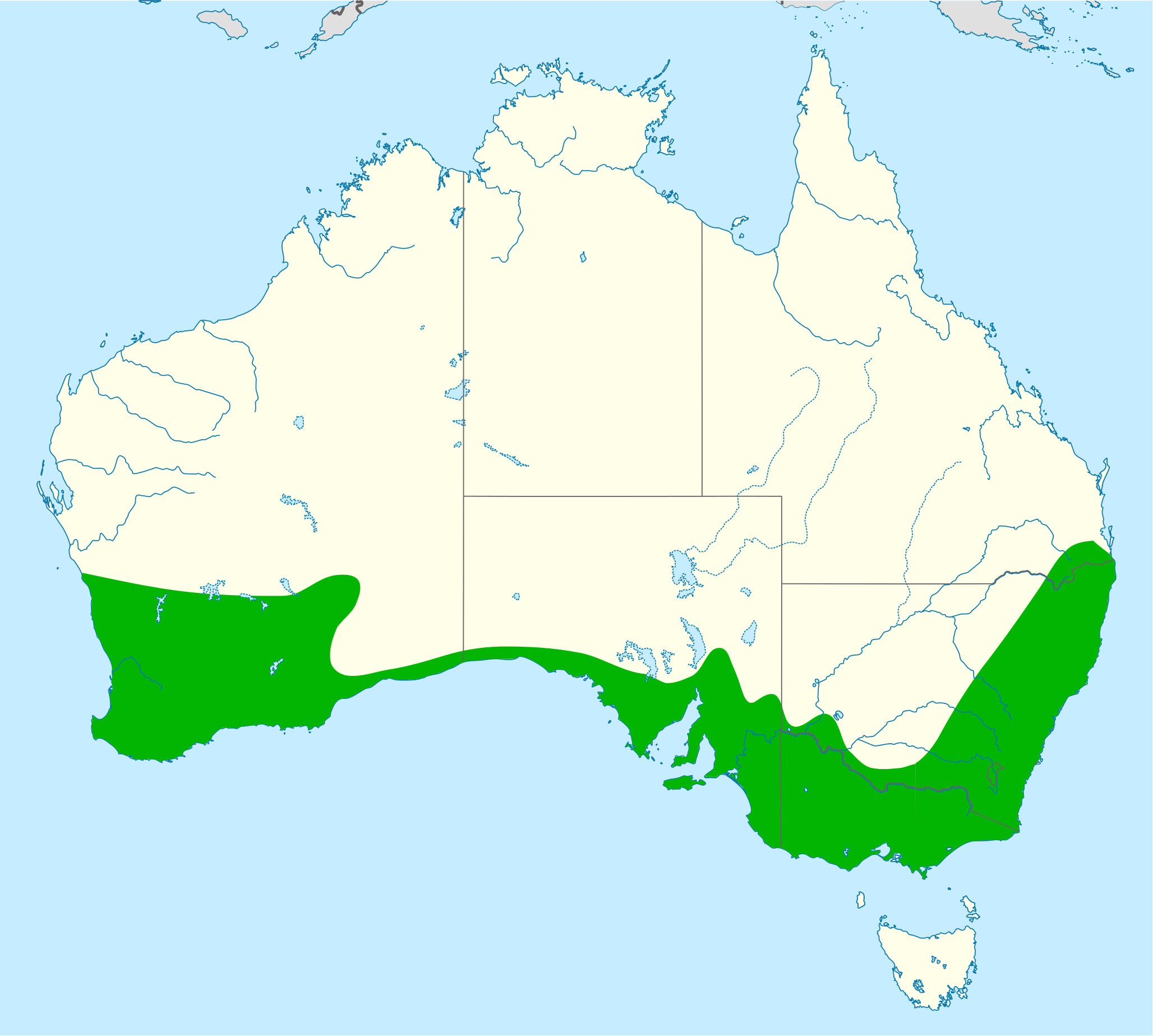 becoming more common south of Brisbane and Toowoomba. Further south into New South Wales it is found most places east of (and including) the Great Dividing Range and stretching west to the southern North-West Plain, Central Western Slopes and eastern Riverina, and is an occasional visitor to points along the Murray River valley. It is found across Victoria, though is uncommon in the northwest of the state. In South Australia, Devonborough Downs Station, Manunda, Wilpena Pound and Nullarbor Station mark the northern limits of its range. There are scattered records from the Nullarbor Plain, but is common in Western Australia west of 125 °E and south of 29 °S.[23] The yellow wattlebird replaces it in Tasmania.

The red wattlebird appears to be sedentary (present year-round) in much of its range, though its movements are poorly known. It appears to be partly migratory in Western Australia and the north coast of New South Wales. In southeastern New South Wales and the Australian Capital Territory, it appears to move to lower altitudes for winter. Overall, little pattern is discernible in the species’ movements, though it does appear that red wattlebirds move to feed on populations of flowering banksias and eucalypts, such as winter-flowering banksias in Perth over the cooler months.[24]

It has become more common in some localities, such as the Sunraysia district in the 1960s and Nambucca Heads and Lefevre Peninsula in the 1980s.[23] Numbers breeding have increased in Sydney and Adelaide.[25]

The red wattlebird is a rare vagrant to New Zealand, with confirmed records at Matakana in 1865 and Rohutu, Taranaki in 1885, and a third unconfirmed from Motupiko in 1938.[23]

Open sclerophyll forest and woodland, generally dominated by eucalypts, is the most common habitat of the species. It is more common in forests with ample shrubby or grassy understory. It is less commonly encountered in scrub, heath, or margins of wet sclerophyll forest. It is rarely found in mature pine plantations. Within areas of human habitation, it is abundant in areas such as parks and reserves, gardens and golf courses, as well as orchards and vineyards.[23] 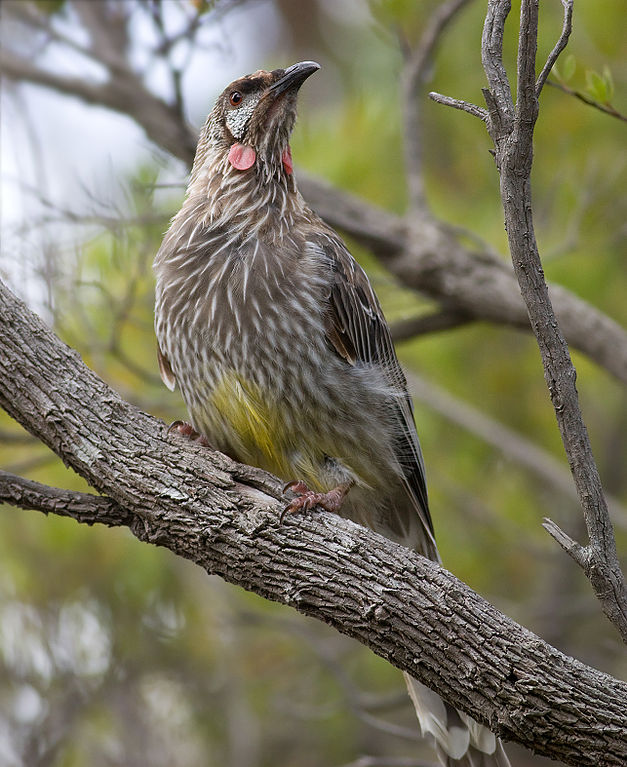 The red wattlebird breeds throughout its range, with nesting taking place between July and December, though occasionally outside these months if conditions are favourable. One or two broods are laid each year.[26]

Birds generally nest as solitary pairs.[27] The nest is a bowl-shaped structure formed from sticks and leaves lined with bark, grass and hair,[26] between 2 and 16 metres (7 and 50 ft) above ground, usually in the forked branches of a tree—generally a eucalypt.[26] A clutch of two or three, pale brown- and lavender-spotted pinkish eggs are normally laid. They measure 33 mm × 22 mm (1.30 in × 0.87 in) and are a tapered oval in shape.[26] The eggs are normally incubated by both parents, but sometimes just by the female. They hatch after 16-21 days.[19] The chicks are born almost naked with a small amount of grey down on their head and body.[28] They are mostly brooded by the female but sometimes the male will also do so. The nestlings are fed by both parents, and occasionally immature birds will also contribute. Their eyes open at around 7 days.[29] They fledge 15-20 days after hatching and both parents continue to feed them for a further 2-3 weeks.[19]

Foraging takes place mostly in trees, in particular climbing along branches (rather than the trunk) and at flower heads, probing flowers with their bills.[30] One study in Bondi State Forest revealed red wattlebirds foraged at a height of 5.9 ± 5.8 m.[citation needed] They seldom forage on the ground, though do so to feed on shrubs such as kangaroo paws (Anigozanthos species) or seize invertebrates in grass.[citation needed] Red wattlebirds prioritise visiting flowers that produce a lot of nectar, such as eucalypts, banksias, grasstrees (Xanthorrhoea) and emu bushes (Eremophila).[30] In addition to nectar, it takes insects and other small creatures, usually by hawking, and also berries and other fruit.[19]

One field study found that red wattlebirds foraged for longer periods when nectar concentrations in flowers were low, and consumed fewer insects at this time. However, this could have been because the temperature was lower and hence insects were less active.

Fieldwork at several sites around central New South Wales showed that red wattlebirds foraged more often on the foliage of the grey gum (Eucalyptus punctata) over other trees, though did also show some preference for narrow-leaved ironbark (E. crebra) if grey gum was not present. Red wattlebirds also appeared to oust noisy friarbirds (Philemon corniculatus) if both species were present.[31]

Red wattlebirds are adversely impacted by land and undergrowth clearing, and have vanished from some habitats thus altered.[25] They are regularly killed by cats and dogs, as well as being hit by cars on roads.[25]

In 1924 in northern Victoria, the red wattlebird was described as very wary, on account of being highly regarded (and shot) for its meat.[33] Indeed it was shot widely for food or sport,[15] or because it was held to be a pest of vineyards or orchards.[25]