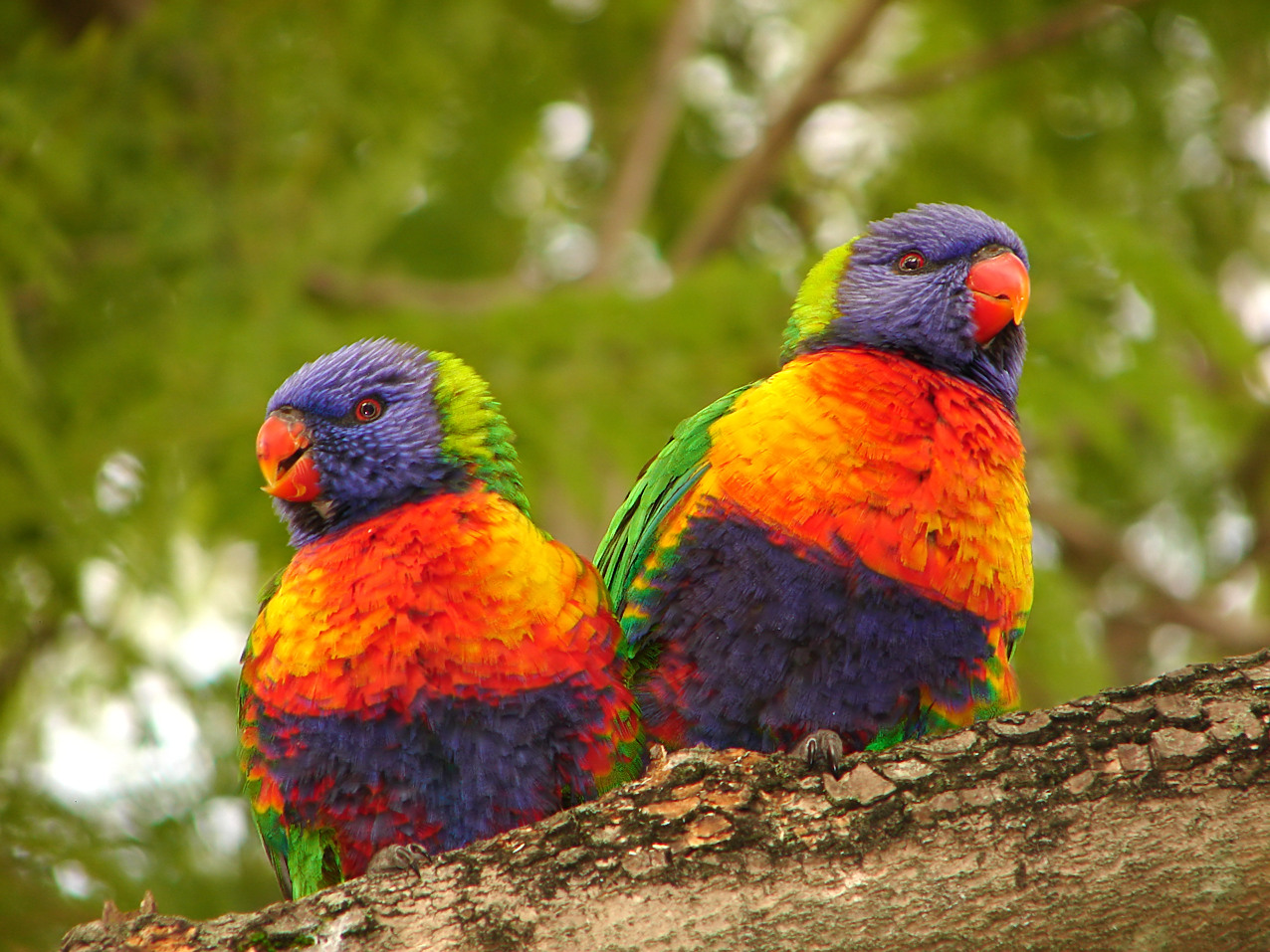 The rainbow lorikeet (Trichoglossus moluccanus) is a species of parrot found in Australia. It is common along the eastern seaboard, from northern Queensland to South Australia and Tasmania. Its habitat is rainforest, coastal bush and woodland areas. Several taxa traditionally listed as subspecies of the rainbow lorikeet are now treated as separate species.

The rainbow lorikeet is a medium-sized parrot, with the length ranging from 25 to 30 cm (9.8–11.8 in), including the tail. The weight varies from 75 to 157 g (2.6–5.5 oz). The plumage of the nominate race, as with all subspecies, is very bright. The head is deep blue with a greenish-yellow nuchal collar, and the rest of the upper parts (wings, back and tail) are deep green. The chest is red with blue-black barring. The belly is deep green, and the thighs and rump are yellow with deep green barring. In flight a yellow wing-bar contrasts clearly with the red underwing coverts.

There is little to visually distinguish between the sexes; however, to a keen observer of their colouring and behaviour, their dimorphism is readily apparent.

Juveniles have a black beak, which gradually brightens to orange in the adults.

The markings of the best known subspecies T. h. moluccanus resemble those of the nominate race, but with a blue belly and a more orange breast with little or no blue-black barring.[8] Other subspecies largely resemble either the nominate race or T. h. moluccanus, or are intermediate between them. Two exceptions are T. h. flavicans and T. h. rosenbergii. In the rather variable T. h. flavicans the green of some individuals is dull, almost olivaceous,[8] but in others the green hue approaches that typical of the rainbow lorikeet. T. h. rosenbergii is highly distinctive and several features separates it from all other subspecies: Its wing-bars are deep orange (not contrasting clearly with the red underwing coverts in flight), the entire nape is yellow bordered by a narrow red band and the dark blue barring to the red chest is very broad.[8]

Unlike the eclectus parrot, rainbow lorikeets do not have any immediately discernible dimorphic traits. 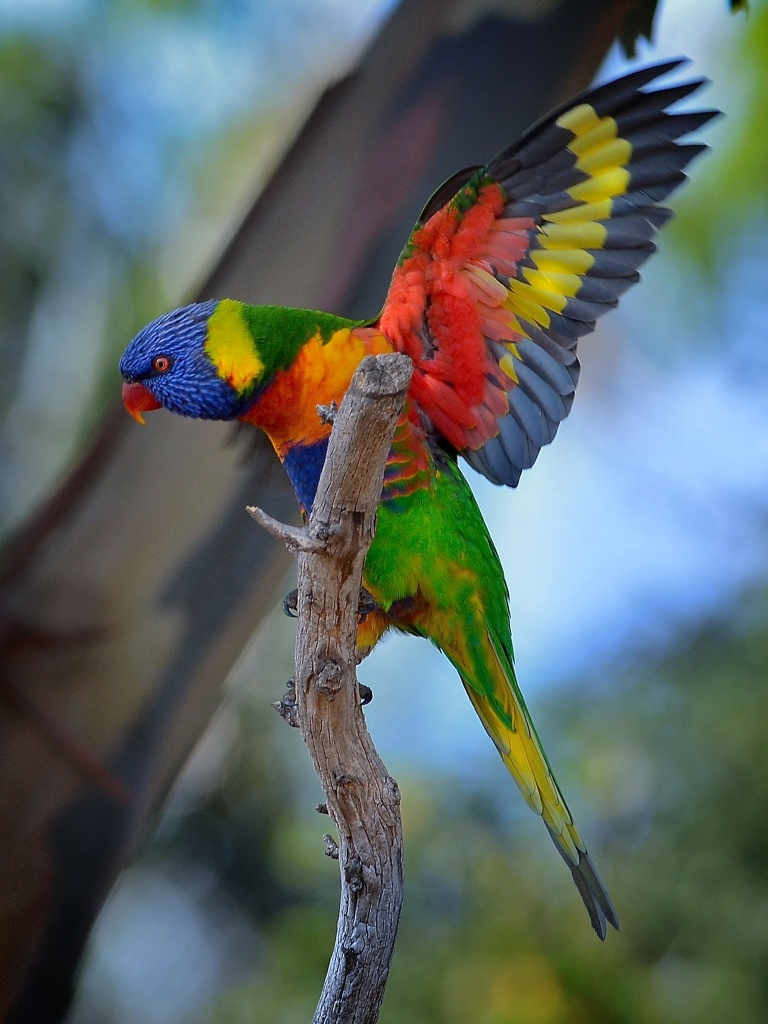 Upon closer observation of their colouring, size and behaviour however, it is possible to determine the sex of a rainbow lorikeet.

This process is made easier when one observes them in pairs; however the general rules are that a male will have a greater concentration of dark orange on his breast as opposed to the more pronounced bleeding of yellow into orange of a female.

The male will also be more robust across the breast and traditionally have a thicker, more square head whilst the female sports a more rounded visage.

When feeding in a flock during breeding season, the male will often puff up and produce a threatening display, hopping around his partner as she feeds and ensuring that competitors for food do not interrupt her ingestion of food.

Rainbow lorikeets are monogamous and pair for life.

To the casual observer, there is no discernible difference in terms of the sexes, however with continual observation of the species whilst in flock behaviour, the dimorphism becomes apparent.

Rainbow lorikeets feed mainly on fruit, pollen and nectar, and possess a tongue adapted especially for their particular diet. The end of the tongue is equipped with a papillate appendage adapted to gathering pollen and nectar from flowers.[9] Nectar fromeucalyptus is important in Australia, other important nectar sources are Pittosporum, Grevillea, Spathodea campanulata (African tulip-tree), and Metroxylon sagu (sago palm).[8] In Melanesia coconuts are very important food sources, and rainbow lorikeets are important pollinators of these.[10] They also consume the fruits of Ficus, Trema, Mutingia, as well as papaya and mangoes already opened by fruit bats. They also eat crops such as apples, and will raid maize and sorghum.[8] They are also frequent visitors at bird feeders placed in gardens, which supply store-bought nectar, sunflower seeds, and fruits such as apples, grapes and pears.

In many places, including campsites and suburban gardens, wild lorikeets are so used to humans that they can be hand-fed. The Currumbin Wildlife Sanctuary in Queensland, Australia, is noted for its thousands of lorikeets. Around 8am and 4pm each day the birds gather in a huge, noisy flock in the park’s main area. Visitors are encouraged to feed them a specially prepared nectar, and the birds will happily settle on people’s arms and heads to consume it. Wild rainbow lorikeets can also be hand-fed by visitors atLone Pine Koala Sanctuary in Brisbane, Queensland, Australia.

Semi-tame lorikeets are common daily visitors in many Sydney backyards, though many people, ignorant of their dietary requirements, feed them bread or bread coated with honey. This is an inadequate source of the nutrients, vitamins and minerals that the rainbow lorikeet requires and can lead to health and feather formation issues in young lorikeets.[11] Packet mixes with a nutritional mix suitable for feeding lorikeets are generally available from vets and pet stores.[12]

In Australia, breeding usually occurs during spring (September to December), but can vary from region to region with changes in food availability and climate. Nesting sites are variable and can include hollows of tall trees such as eucalyptus, palm trunks, or overhanging rock.[13] One population in the Admiralty Islands nests in holes in the ground on predator-free islets.[14] Pairs sometimes nest in the same tree with other rainbow lorikeet pairs, or other bird species[13] The clutch size is between one and three eggs, which are incubated for around 25 days.[8] Incubation duties are carried out by the female alone.[10]

Overall, the rainbow lorikeet remains widespread and often common. It is therefore considered to be of least concern by BirdLife International. The status for some localised subspecies is more precarious, with especially T. h. rosenbergii (which possibly is worthy of treatment as a separate species) being threatened by habitat loss and capture for the parrot trade.[6][15]

A feral population of rainbow lorikeets was established in New Zealand after a North Shore, Auckland, resident illegally[16]released significant numbers of captive-reared birds in the area in the 1990s, which started breeding in the wild. By 1999, a self-sustaining feral population of 150–200 birds had been established in the region, proving that they could survive and adapt to the New Zealand environment.[17] The Department of Conservation, concerned that rainbow lorikeets would outcompete nativehoneyeaters and by the possible threat to pristine island habitats such as Little Barrier Island, began eradicating the feral population in 2000. MPI (the Ministry of Primary Industries) Bio-security, in partnership with DOC and regional councils, now manages rainbow lorikeets under the National Interest Pest Response initiative. The aim of the response is to prevent rainbow lorikeets from becoming established in the wild.[17] Late in 2010, five of these birds were discovered living in the Mount Maunganui area. They were fed for a few days before being trapped by a Ministry of Agriculture & Fisheries contractor.[18]

Many fruit orchard owners consider them a pest, as they often fly in groups and strip trees containing fresh fruit. In urban areas, the birds create nuisance noise and foul outdoor areas and vehicles with droppings.[13]

In Western Australia, a major impact of the rainbow lorikeet is competition with indigenous bird species. This includes domination of food sources and competition for increasingly scarce nesting hollows.[13] Bird species such as the purple-crowned lorikeet, the Carnaby’s black cockatoo,[13] and the Australian ringneck are adversely affected or displaced.