by Nature Mates on September 24, 2015 in Birds, Kookaburras 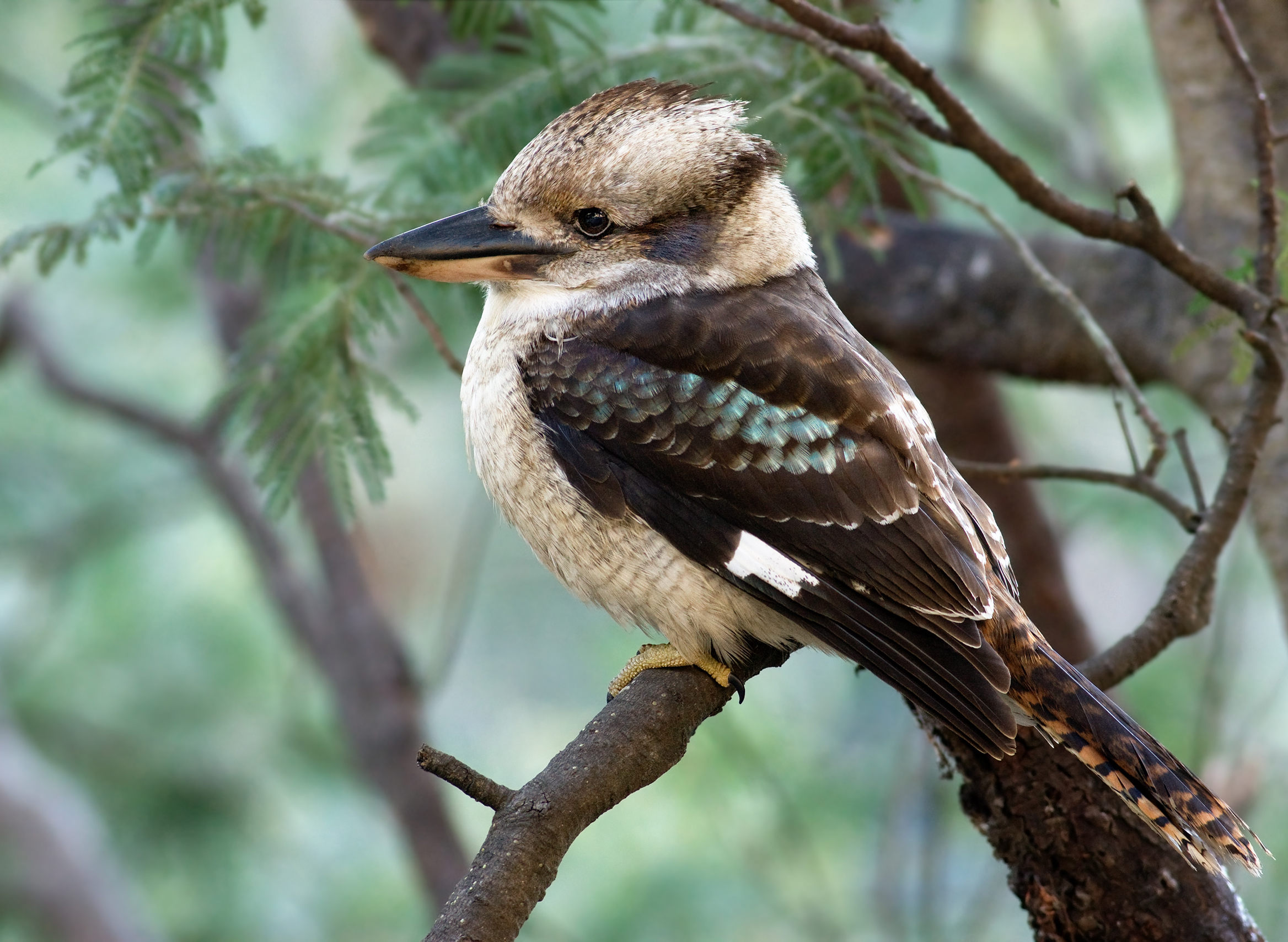 The laughing kookaburra (Dacelo novaeguineae) is a carnivorous bird in the kingfisher family Halcyonidae. Native to eastern Australia, it has also been introduced to parts of New Zealand, Tasmania, and Western Australia. Male and female adults are similar in plumage, which is predominantly brown and white. A common and familiar bird, this species of kookaburra is well known for its laughing call.

The laughing kookaburra is a stout, stocky bird about 45 cm (18 in) in length, with a large head, prominent brown eyes, and a very large bill. The sexes are very similar, although the female is usually larger and has less blue to the rump than the male. They have a white or cream-coloured body and head with a dark brown stripe across each eye and more faintly over the top of the head. The wings and back are brown with sky blue spots on the shoulders. The tail is rusty reddish-orange with dark brown bars and white tips on the feathers. The heavy bill is black on top and bone-coloured on the bottom. It is possibly the largest kingfisher, and generally the heaviest.[6][7]

The name “laughing kookaburra” refers to the bird’s “laugh”, which it uses to establish territory amongst family groups. It can be heard at any time of day, but most frequently shortly after dawn and after sunset to dusk.

One bird starts with a low, hiccuping chuckle, then throws its head back in raucous laughter: often several others join in. If a rival tribe is within earshot and replies, the whole family soon gathers to fill the bush with ringing laughter. Hearing kookaburras in full voice is one of the more extraordinary experiences of the Australian bush, something even locals cannot ignore; some visitors, unless forewarned, may find their calls startling.[8]

The kookaburra is also the subject of a popular Australian children’s song, the “Kookaburra”.

The laughing kookaburra is native to eastern mainland Australia, and has also been introduced to Tasmania, Flinders Island, andKangaroo Island.

Some were also introduced to New Zealand between 1866 and 1880, but only those released on Kawau Island by Sir George Grey survived. Descendants of these individuals are found there today. Remnants of this population have been seen on the New Zealand mainland near Matakana.

Individuals were released at Perth, Western Australia, in 1898 and can now be found throughout southwest Australia. 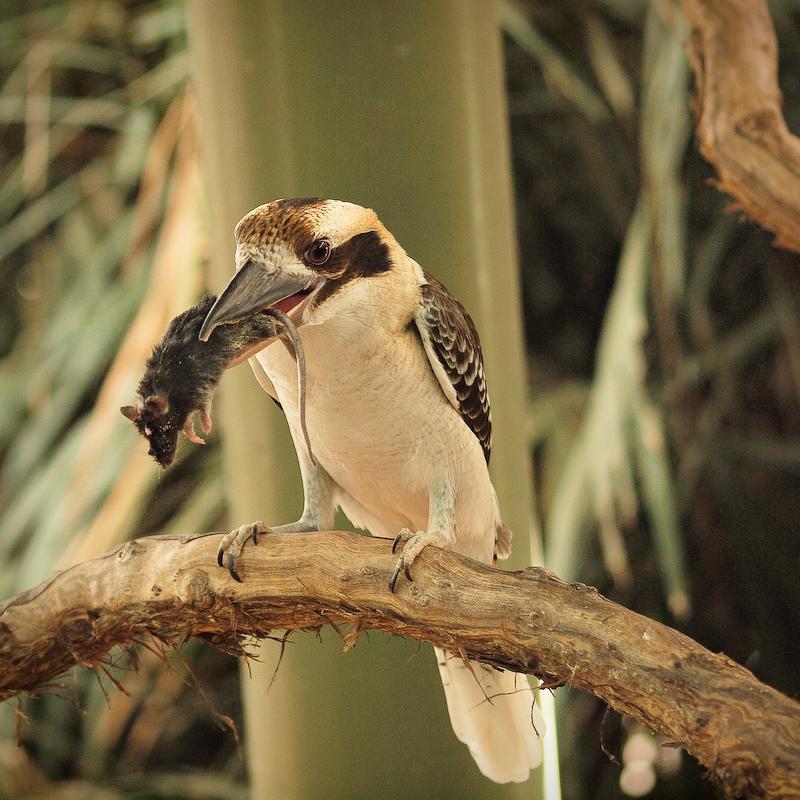 Kookaburras hunt much as other kingfishers (or indeed Australasian robins) do, by perching on a
convenient branch or wire and waiting patiently for prey to pass by. Common prey include miceand similar-sized small mammals, large insects, lizards, small birds and nestlings, and most famously, snakes. Small prey are preferred, but kookaburras sometimes take large creatures, including venomous snakes, much longer than their bodies. 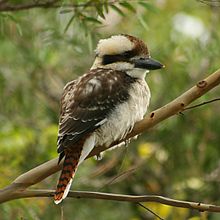 During mating season, the laughing kookaburra reputedly indulges in behaviour similar to that of a wattlebird. The female adopts a begging posture and vocalises like a young bird. The male then offers her his current catch accompanied with an “oo oo oo” sound. However, some observers maintain that the opposite happens – the female approaches the male with her current catch and offers it to him. Either way, they start breeding around October/November. If the first clutch fails, they will continue breeding into the summer months.

They generally lay three eggs at about two-day intervals. If the food supply is not adequate, the third egg will be smaller and the third chick will also be smaller and at a disadvantage relative to its larger siblings. Chicks have a hook on the upper mandible, which disappears by the time of fledging. If the food supply to the chicks is not adequate, the chicks will quarrel, with the hook being used as a weapon. The smallest chick may even be killed by its larger siblings. If food is plentiful, the parent birds spend more time brooding the chicks, so the chicks are not able to fight.

Laughing kookaburras are a common sight in suburban gardens and urban settings, even in built-up areas, and are so accustomed to humans that they will often eat out of their hands. It is not uncommon for kookaburras to snatch food out of people’s hands without warning, by swooping in from a distance. People often feed them pieces of raw meat.