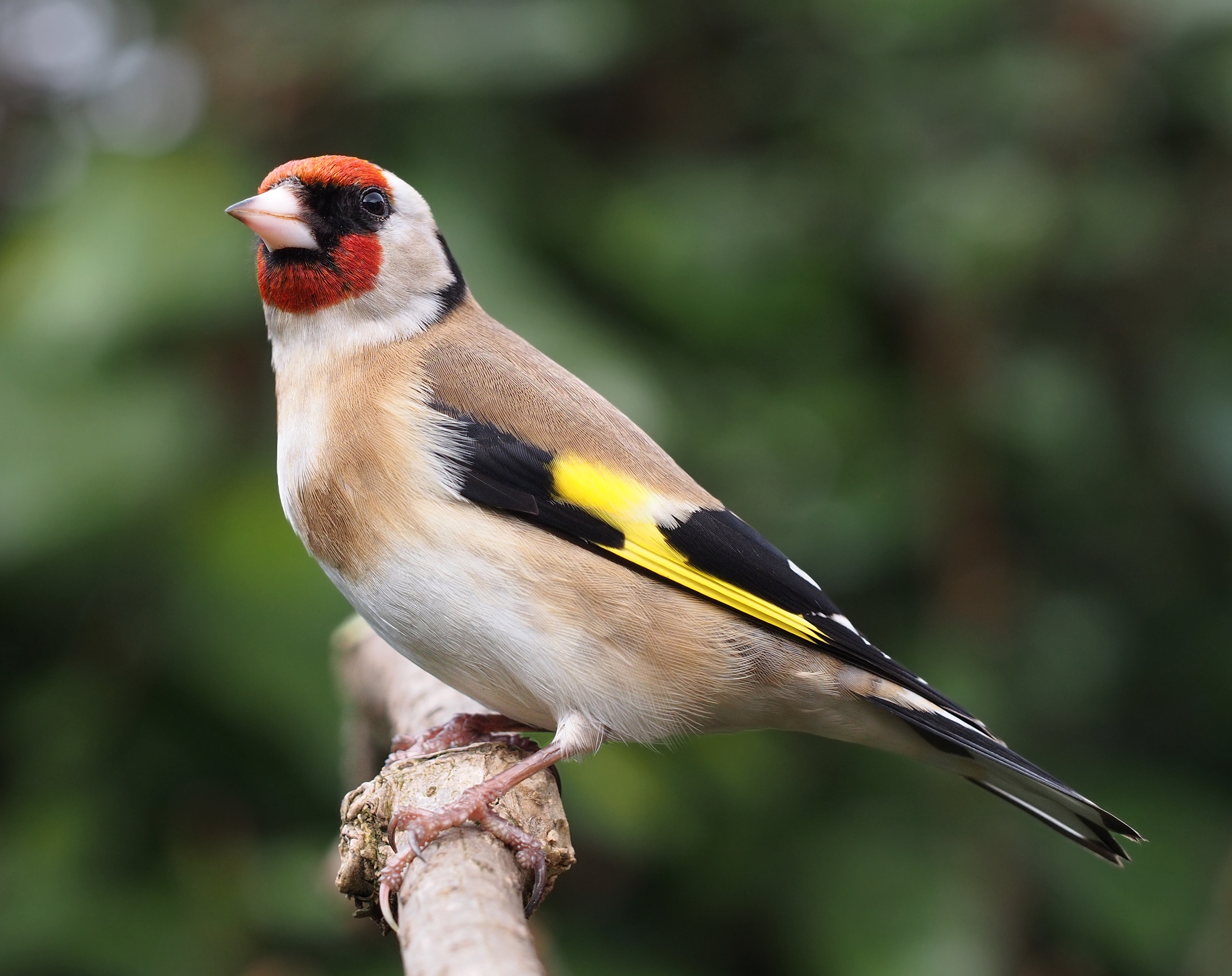 The European goldfinch or goldfinch (Carduelis carduelis), is a small passerine bird in the finch family that is native to Europe, North Africa and western Asia. It has been introduced to other areas including Australia, New Zealand and Uruguay.

The goldfinch has a red face and a black-and-white head. The back and flanks are buff or chestnut brown. The black wings have a broad yellow bar. The tail is black and the rump is white. The female is very similar to the male but has a slightly smaller red area on the face.

The goldfinch is often depicted in Italian renaissance paintings of the Madonna and Child.

On closer inspection male goldfinches can often be distinguished by a larger, darker red mask that extends just behind the eye. In females, the red face does not extend past the eye. The ivory-coloured bill is long and pointed, and the tail is forked. Goldfinches in breeding condition have a white bill, with a greyish or blackish mark at the tip for the rest of the year. Juveniles have a plain head and a greyer back but are unmistakable due to the yellow wing stripe. Birds in central Asia (caniceps group) have a plain grey head behind the red face, lacking the black and white head pattern of European and western Asian birds.[10][11]

The goldfinch is native to Europe, North Africa, and western and central Asia. It is found in open, partially

wooded lowlands and is a resident in the milder west of its range, but migrates from colder regions. It will also make local movements, even in the west, to escape bad weather. It has been introduced to many areas of the world.[12] It was introduced to Canada, United States, Mexico,Peru, Argentina, Chile, the Falkland Islands, Uruguay, Brazil, South Africa, Australia, and New Zealand,[13] in the 19th century, and their populations quickly increased and their range expanded greatly. They now occur from Brisbane to the Eyre Peninsula in Australia, and throughout New Zealand.[14]

The nest is built entirely by the female and is generally completed within a week. The male accompanies the female but does not contribute.[15] The nest is neat and compact and is generally located several meters above the ground, hidden by leaves in the twigs at the end of a swaying branch.[16] It is constructed of mosses and lichens and lined with plant down such as that from thistles. It is attached to the twigs of the tree with spider silk. A deep cup prevents the loss of eggs in windy weather.[17] Beginning within a couple of day after the completion of the nest, the eggs are laid in early morning at daily intervals.[15] The clutch is typically 4-6 eggs which are whitish with reddish-brown speckles.[16] They have a smooth surface and are slightly glossy.[15] The average size is 17.3 mm × 13.0 mm (0.68 in × 0.51 in) with a calculated weight of 1.53 g (0.054 oz).[15] The eggs are incubated for 11–13 days by the female who is fed by the male. The chicks are fed by both parents. Initially they receive a mixture of seeds and insects but as they grow the proportion of insect material decreases.[18] For the first 7–9 days the young are brooded by the female. The nestlings fledge 13–18 days after hatching. The young birds are fed by both parents for a further 7–9 days. The parents typically raise two brood each year and occasionally three.[15]

The goldfinch’s preferred food is small seeds such as those from thistles (the Latin name is from Carduus, a genus of thistles) and teasels, but insects are also taken when feeding young. It also regularly visits bird feeders in winter. In the winter goldfinches group together to form flocks of up to forty, occasionally more. Goldfinches are attracted to back gardens in Europe and North America by birdfeeders containing niger (commercially described as nyjer) seed. This seed of an annual from South Asia is small, and high in oils. Special polycarbonate feeders with small oval slits at which the goldfinches feed are sometimes used.