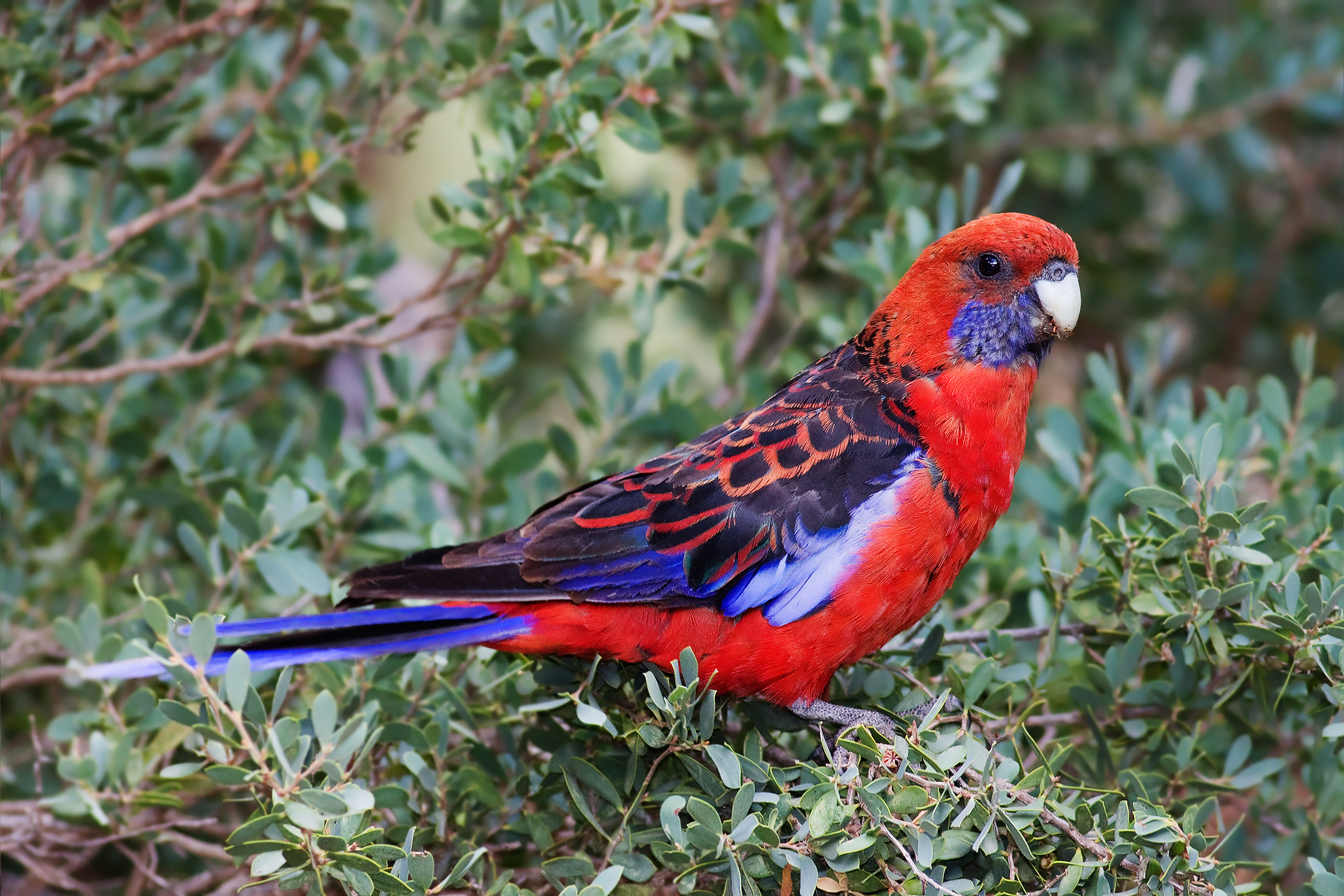 Platycercus elegans is a medium-sized Australian parrot at 36 cm (14 in) long, much of which is tail. There are five subspecies, three of which are actually crimson. The red is replaced by yellow in the case of var. flaveolus and a mixture of red, orange and yellow in the Adelaide rosella.

Adults and juveniles generally show strikingly different colouration in south-eastern populations, with predominantly greenish-olive body plumage on the juvenile, most persistent on the nape and breast. Juveniles are said to ‘ripen’ as they get older and turn from green to red. All races have blue cheeks and black-scalloped blue-margined wings and predominantly blue tail with predominantly red coloration. The crimson rosella’s blue tail feathers are one of the favourite decorations of the satin bowerbird. The bill is pale grey and the iris dark brown.

There is very little sexual dimorphism in crimson rosellas. The most noticeable difference between genders is that males are up to 15% larger, and have a relatively larger and wider beak. 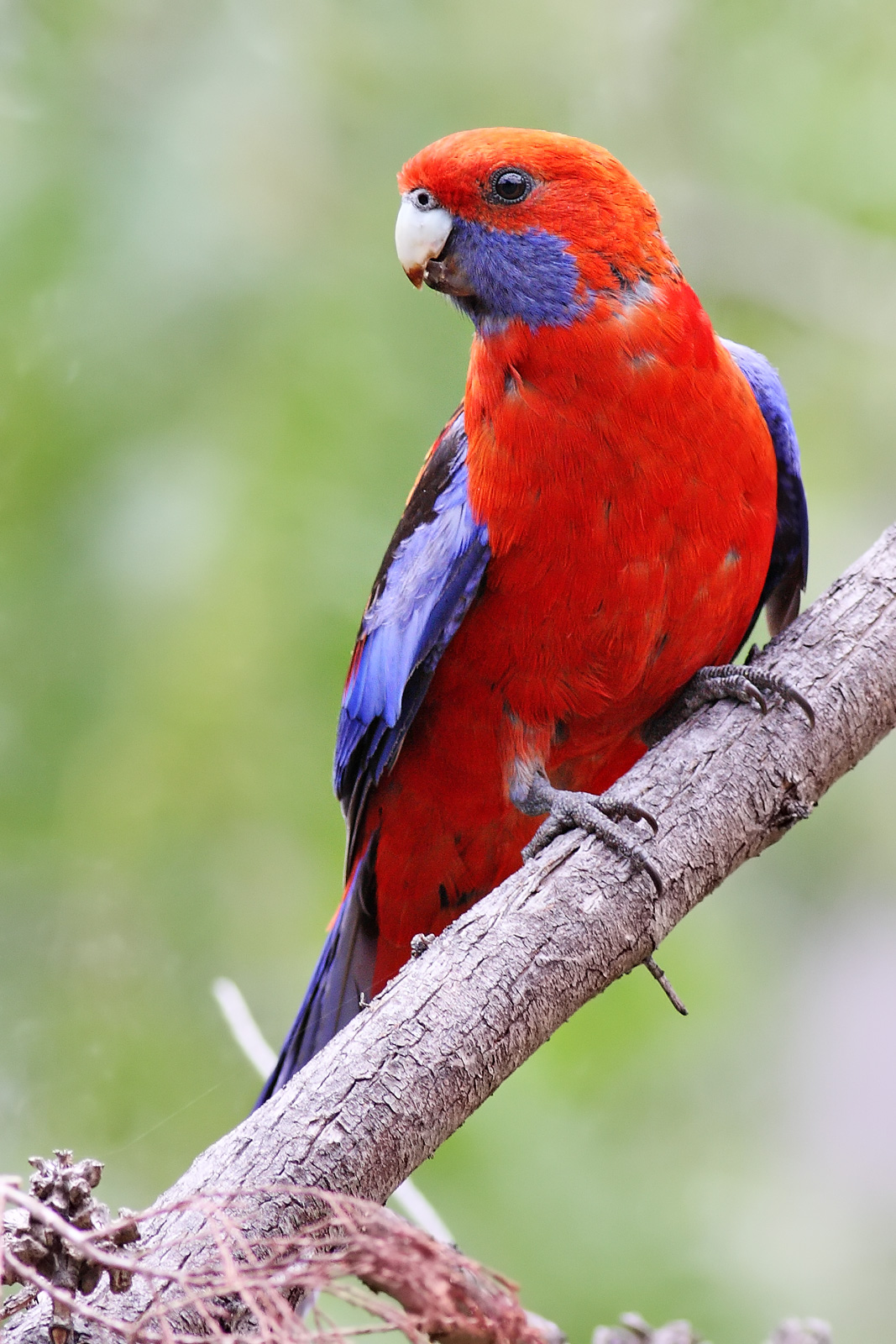 etween these is size: nigrescens is the smallest of the three and melanoptera is the largest; both are slightly darker than the nominate race.

The juveniles of var. nigrescens lack the greenish immature plumage of the other subspecies of crimson rosella

The yellow rosella, which lives along the Murray River and several of its tributaries, was reclassified (1968) as a subspecies, P. elegans flaveolus, of the crimson as the two were found to interbreed where their ranges overlap. The main difference between the two is that those parts of the crimson rosella which are red are on the yellow rosella bright yellow and red eye.

Eating seeds from the ground. The feathers on the back have a scalloped pattern.

The Adelaide rosella of Adelaide and the surrounding area was also thought to be a separate species, but is presently believed to be a hybrid swarm, having originated through interbreeding of the crimson and yellow rosellas. Both of these still interbreed with the Adelaide rosella where its range crosses theirs, and it exhibits variation in its plumage from dark orange-red in the south of its distribution to a pale orange-yellow in the north. Variants that are very close to the yellow race are designatedsubadelaidae. 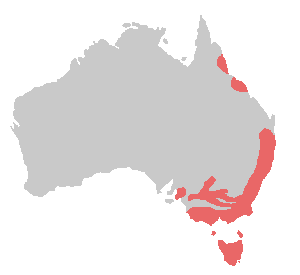 Crimson rosellas are common in coastal and mountain forests at all altitudes. They primarily live in forests and woodlands, preferring older and wetter forests. They can be found in tropical, subtropical, and temperate rainforests, both wet and drysclerophyllous forests, riparian forests, and woodlands, all the way from sea level up to the tree line. They will also live in human-affected areas such as farmlands, pastures, fire-breaks, parks, reserves, gardens, and golf-courses. They are rarely found in treeless areas. At night, they roost on high tree branches.

Almost all rosellas are sedentary, although occasional populations are considered nomadic; no rosellas are migratory. Outside of the breeding season, crimson rosellas tend to congregate in pairs or small groups and feeding parties. The largest groups are usually composed of juveniles, who will gather in flocks of up to 20 individuals. When they forage, they are conspicuous and chatter noisily. Rosellas are monogamous, and during the breeding season, adult birds will not congregate in groups and will only forage with their mate.

According to a new study crimson rosella’s can identify birds of their own subspecies based on the smell of other birds.[9]

Crimson rosellas forage in trees, bushes, and on the ground for the fruit, seeds, nectar, berries, and nuts of a wide variety of plants, including members of the Myrtaceae, Asteraceae, and Rosaceae families. Despite feeding on fruits and seeds, rosellas are not useful to the plants as seed-spreaders, because they crush and destroy the seeds in the process of eating them.[10]Their diet often puts them at odds with farmers whose fruit and grain harvests can be damaged by the birds, which has resulted in large numbers of rosellas being shot in the past. Adelaide rosellas are known to feed on dormant cherry flower buds.[11] Rosellas will also eat many insects and their larvae, including termites, aphids, beetles, weevils, caterpillars, moths, and water boatmen.[12]

Nesting sites are hollows greater than 1 metre (3.3 feet) deep in tree trunks, limbs, and stumps. These may be up to 30 metres (98 feet) above the ground.[13] The nesting site is selected by the female. Once the site is selected, the pair will prepare it by lining it with wood debris made from the hollow itself by gnawing and shredding it with their beaks. They do not bring in material from outside the hollow. Only one pair will nest in a particular tree. A pair will guard their nest by perching near it at chattering at other rosellas that approach. They will also guard a buffer zone of several trees radius around their nest, preventing other pairs from nesting in that area.

The breeding season of the crimson rosella lasts from September through to February, and varies depending on the rainfall of each year; it starts earlier and lasts longer during wet years. The laying period is on average during mid- to late October. Clutch size ranges from 3–8 eggs, which are laid asynchronously at an average interval of 2.1 days; the eggs are white and slightly shiny and measure 28 x 23 mm.[13] The mean incubation period is 19.7 days, and ranges from 16–28 days. Only the mother incubates the eggs. The eggs hatch around mid-December; on average 3.6 eggs successfully hatch. There is a bias towards female nestlings, as 41.8% of young are male. For the first six days, only the mother feeds the nestlings. After this time, both parents feed them. The young become independent in February, after which they spend a few more weeks with their parents before departing to become part of a flock of juveniles. Juveniles reach maturity (gain adult plumage) at 16 months of age.

The nominate bird is mainly red, and a few colour mutations exist, such as the blue, yellow, white, and cinnamon, in aviculture.

Crimson rosellas may be eaten by cats or dogs, and have been found to make up a small part of the diet of the fox in some areas. Possums and currawongs are also believed to occasionally take eggs from the nest. Surprisingly, however, the crimson rosella is its own worst enemy. During the breeding season, it is common for females to fly to other nests and destroy the eggs and in fact, this is the most common cause for an egg failing to hatch. This behaviour is thought to be a function of competition for suitable nesting hollows, since a nest will be abandoned if all the eggs in it are destroyed, and a pair of rosellas will tend to nest in the same area from year to year.

A new study has shown that hybrid birds were more likely to fight off diseases than were pure breeds. Scientists from the Centre for Integrative Ecology at Deakin University in Geelong, Victoria, studied the infection patterns of beak and feather diseases in crimson rosellas across southern Australia. This included several hybrid populations in northeastern Victoria and southern New South Wales, located in between the range of the two parent subspecies. (Platycercus elegans flaveolus and P. e. elegans). They found that when the subspecies mated, the resulting offspring seemed to cope better with a potentially deadly virus.[14]