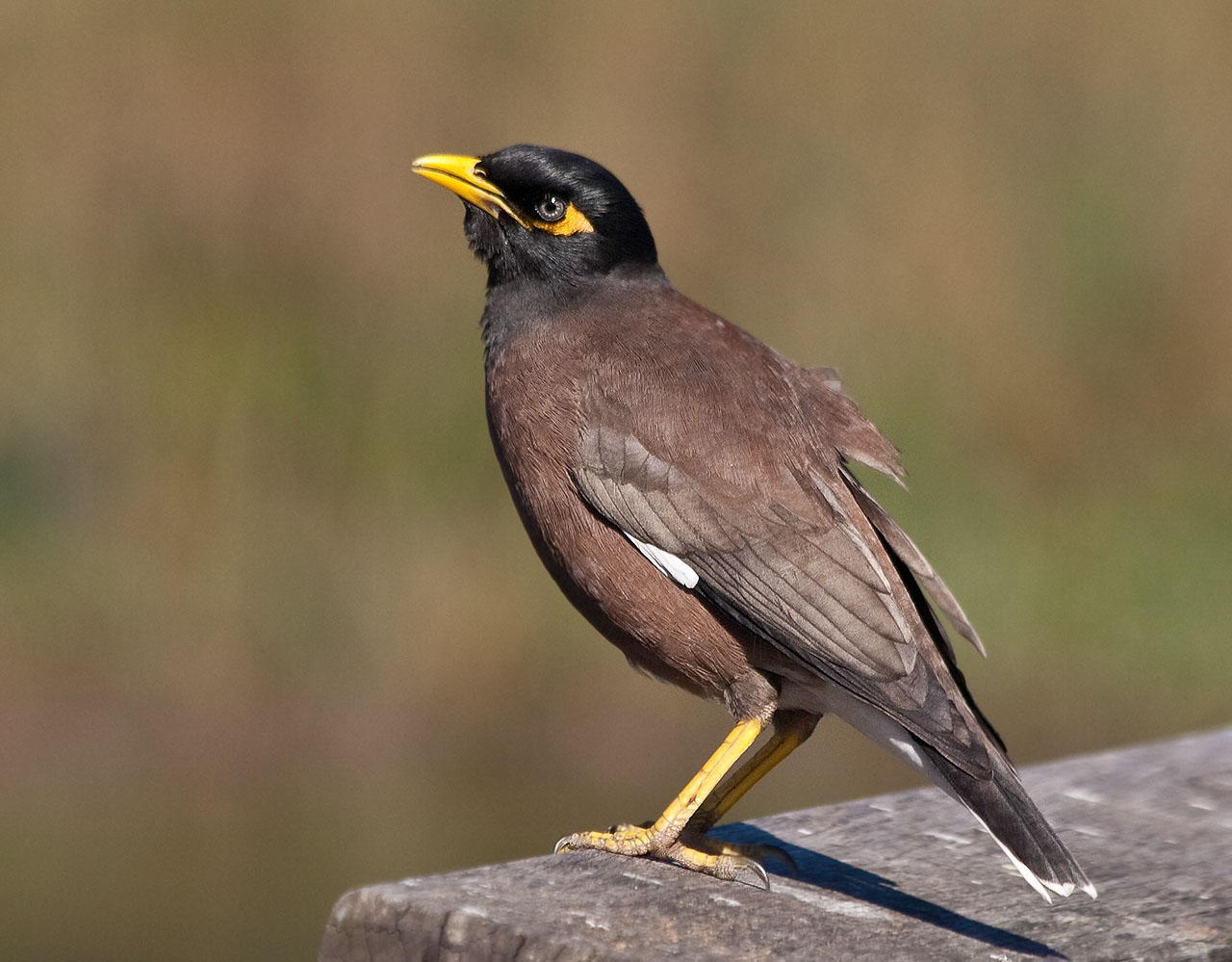 The common myna is readily identified by the brown body, black hooded head and the bare yellow patch behind the eye. The bill and legs are bright yellow. There is a white patch on the outer primaries and the wing lining on the underside is white. The sexes are similar and birds are usually seen in pairs.[5]

It is a species of bird native to Asia with its initial home range spanning from Iran, Pakistan, India, Nepal, Bhutan, Bangladesh and Sri Lanka; as well as Afghanistan, Tajikistan, Turkmenistan, Myanmar, to Malaysia, Singapore, peninsular Thailand, Indo-China and China.[6][8]

The myna has been introduced in many other parts of the world such as Canada, Australia, Israel, New Zealand, New Caledonia, Hawaii, South Africa, Kazakhstan,Kyrgyzstan, Uzbekistan and islands in the Indian Ocean (Seychelles, Mauritius, Réunion, Madagascar, Maldives, Andaman and Nicobar Islands and Lakshadweep archipelago) and also in islands of the Atlantic and Pacific Oceans.[6] The range of the common myna is increasing to the extent that in 2000 the IUCN Species Survival Commission declared it among the World’s 100 worst invasive species.[3] 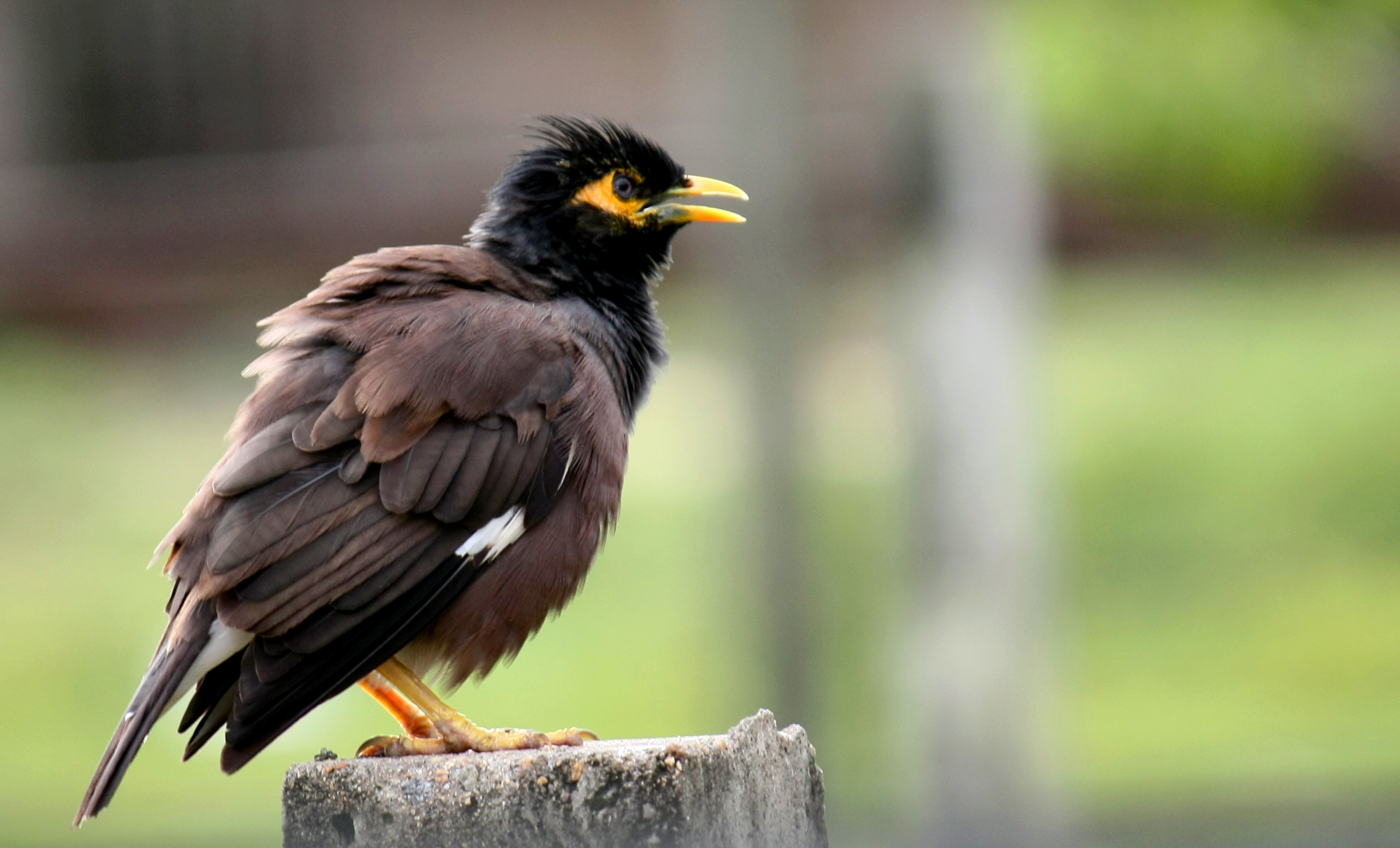 The calls includes croaks, squawks, chirps, clicks, whistles and ‘growls’, and the bird often fluffs its feathers and bobs its head in singing. The common myna screeches warnings to its mate or other birds in cases of predators in proximity or when it is about to take off flying.[10] Common mynas are popular as cage birds for their singing and “speaking” abilities. Before sleeping in communal roosts, mynas vocalise in unison, which is known as “communal noise”.[11]

Common mynas are believed to pair for life. They breed through much of the year depending on the location, building their nest in a hole in a tree or wall. They breed from sea-level to 3000 m in the Himalayas.[6]

The normal clutch size is 4–6 eggs. The average size of the egg is 30.8 x 21.99 mm. The incubation period is 17 to 18 days and fledging period is 22 to 24 days.[6] The Asian koel is sometimes brood parasitic on this species.[12] Nesting material used by mynas include twigs, roots, tow and rubbish. Mynas have been known to use tissue paper, tin foil and sloughed off snake-skin.[6]

During the breeding season, the daytime activity-time budget of common myna in Pune in April to June 1978 has been recorded to comprise the following: nesting activity (42%), scanning the environment (28%), locomotion (12%), feeding (4%), vocalisation (7%) and preening-related activities, interactions and other activities (7%).[13]

The common myna uses the nests of woodpeckers, parakeets, etc. and easily takes to nest boxes; it has been recorded evicting the chicks of previously nesting pairs by holding them in the beak and later sometimes not even using the emptied nest boxes. This aggressive behaviour contributes to its success as an invasive species.[14]

Like most starlings, the common myna is omnivorous. It feeds on insects, arachnids, crustaceans, reptiles, small mammals, seeds, grain and fruits and discarded waste from human habitation. It forages on the ground among grass for insects, and especially for grasshoppers, from which it gets the generic name Acridotheres, “grasshopper hunter”. It however feeds on a wide range of insects, mostly picked from the ground.[6][15] It is a cross-pollinator of flowers such as Salmalia and Erythrina. It walks on the ground with occasional hops and is an opportunistic feeder on the insects disturbed by grazing cattle as well as fired grass fields.[6]

Common mynas roost communally throughout the year, either in pure or mixed flocks with jungle mynas, rosy starlings, house crows, jungle crows, cattle egrets and rose-ringed parakeets and other birds. The roost population can range from less than one hundred to thousands.[16][17] The time of arrival of mynas at the roost starts before and ends just after sunset. The mynas depart before sunrise. The time and timespan of arrival and departure, time taken for final settlement at the roost, duration of communal sleep, flock size and population vary seasonally.[11][18][19]

Communal displays (pre-roosting and post-roosting) consist of aerial maneuvers which are exhibited in the pre-breeding season (November to March). It is assumed that this behaviour is related to pair formation.[21]

This abundant passerine is typically found in open woodland, cultivation and around habitation.

The bird likely owes its success in the urban and suburban settings of Sydney and Canberra to its evolutionary origins; having evolved in the open woodlands of India, the common myna is pre-adapted to habitats with tall vertical structures and little to no vegetative ground cover,[25] features characteristic of city streets and urban nature preserves.

The common myna (along with European starlings, house sparrows, and feral rock pigeons) is a nuisance to city buildings; its nests block gutters and drainpipes, causing water damage to building exteriors.[26]

In Australia, the common myna is an invasive pest. They are now often the predominant bird in urban areas all along the East coast. In a 2008 popular vote, the bird was named “The Most Important Pest/Problem” in Australia, also earning the nickname “flying rats” due to their scavenging resembling that of rats.[4]

The common myna was first introduced to Australia in Victoria between 1863 and 1872 into Melbourne’s market gardens to control insects. The bird is likely to have spread to New South Wales (where it is currently most populous) at around the same time, but documentation is uncertain.[29] The bird was later introduced to Queensland as a predator of grasshoppers and cane beetles. Currently, common myna populations in Australia are concentrated along the eastern coast around Sydney and its surrounding suburbs, with sparser populations in Victoria and a few isolated communities in Queensland.[30] During 2009 several municipal councils in New South Wales began trials of catching myna birds in an effort to reduce numbers.[31]

The bird can live and breed in a wide range of temperatures, ranging from the harsh winters of Canberra to the tropical climate of Cairns. Self-sustaining populations of common myna have been found in regions of mean warmest month temperature no less than 23.2 °C and mean coldest month temperature no less than -0.4 °C, implying that the common myna could potentially spread from Sydney northward along the eastern coast to Cairns and westward along the southern coast to Adelaide (though not to Tasmania, Darwin, or the arid interior regions).[32]

Effect on ecosystems and humans

The common myna is a hollow-nesting species; that is, it nests and breeds in protected hollows found either naturally in trees or artificially on buildings (for example, recessed windowsills or low eaves).[37] Compared to native hollow-nesting species, the common myna is extremely aggressive, and breeding males will actively defend areas ranging up to 0.83 hectares in size (though males in densely populated urban settings tend to only defend the area immediately surrounding their nests).[38]

The common myna is also known to maintain up to two roosts simultaneously; a temporary summer roost close to a breeding site (where the entire local male community sleeps during the summer, the period of highest aggression), and a permanent all-year roost where the female broods and incubates overnight. Both male and female common mynas will fiercely protect both roosts at all times, leading to further exclusion of native birds.[38]

Threat to crops and pasture

The common myna (which feeds mostly on ground-dwelling insects, tropical fruits such as grapes, plums and some berries and, in urban areas, discarded human food)[39] poses a serious threat to Australian blueberry crops, though its main threat is to native bird species.[40]

In Hawaii, where the common myna was introduced to control pest armyworms and cutworms in sugarcane crops, the bird has helped to spread the robust Lantana camara weed across the islands’ open grasslands.[41] It also has been recorded as the fourth-ranking avian pest in the fruit industry by a 2004 survey of the Hawaiian Farm Bureau and the sixth in number of complaints of avian pests overall.[42]