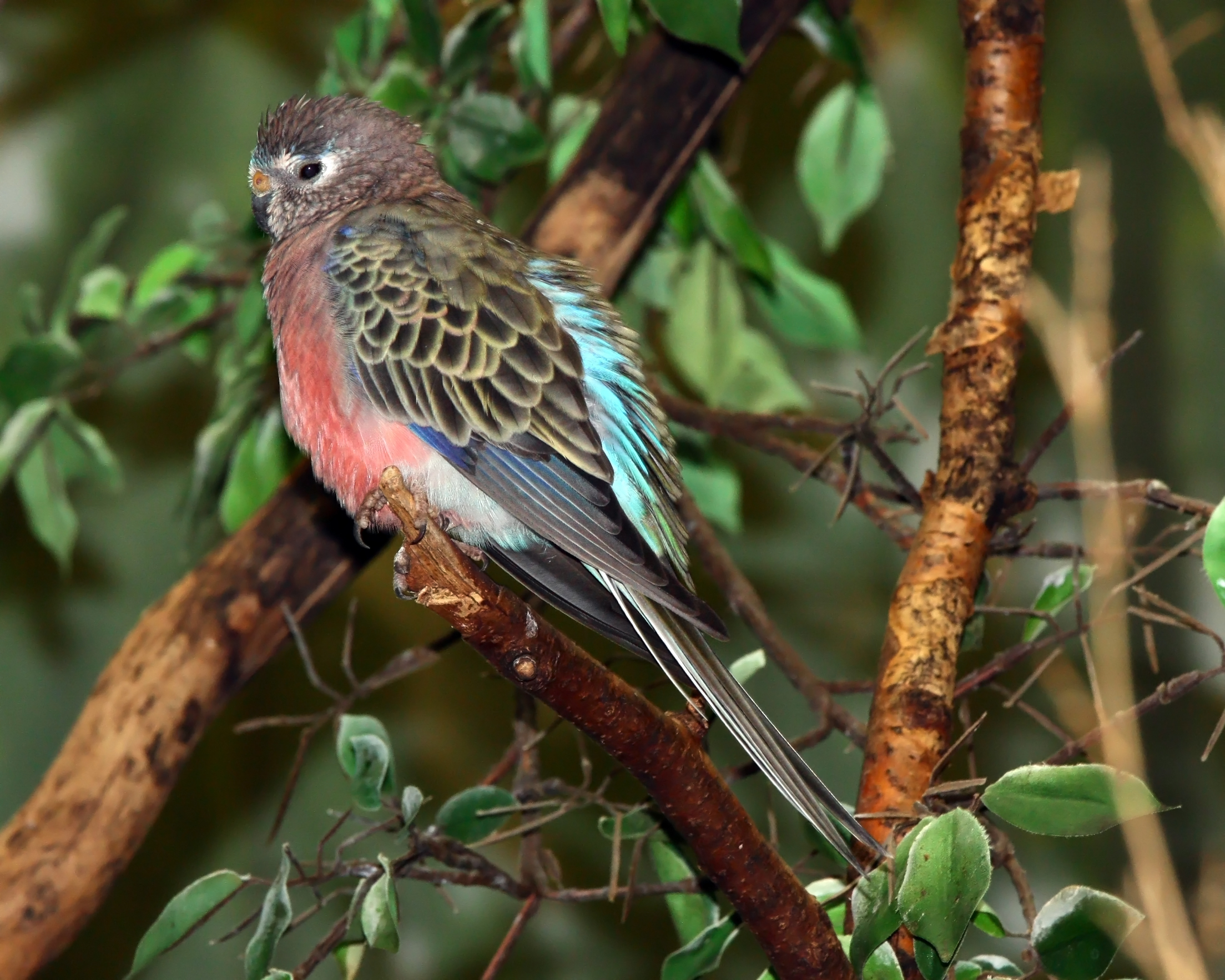 The Bourke’s parrot is a relatively small species. They tend to vary between 18 cm and 23 cm in length with a tail length of approximately 9 cm. The females of the species tend to be slightly smaller than the males. The males of the species weigh between 47 g and 49 g whilst the females weigh between 41 g and 49 g. Young birds under nine months of age both male and female look very similar, after this they come into full plumage colour. Wildtype (natural coloured) Bourke’s parakeet display a basically brown overall colouration with pink abdomen, pinkish breast and a blue rump. The legs are dark-brown, with zygodactyl toes. The bill is yellowish-brown. The adult male has a blue forehead while the adult female has a little or no blue on the forehead. The Bourke’s parrot’s feathers help the species blend in with the reddish soil of its home.[4] There are four documented mutations found in captive Bourke’s parrots; yellow, Isabel, fallow and pink or rosa.[5] The Bourke’s parrots call is rather frequent and sounds like a mellow ‘chu-vee’. Banding of this species requires a 4 mm band.[6]

The Bourke’s parrot is nomadic species native to Australia. It has a vast range and tends to be located in sparsely populated areas across Australia; however they have been known to dwell in urban areas as well. These parrots can be found from the South-western parts of Queensland deep into western New South Wales, throughout central Australia to the far northern parts of South Australia and parts of Western Australia.[8] The Bourke’s parrot’s main habitat consists of areas dominated by Mulga and Acacia species in dry spinifex plains.[9] The species can also be found in native cypress and other open eucalypt woodlands.

Bourke’s parrots forage on the ground for grasses and seeds. They are most active feeding at dusk and dawn.[4] Captive birds can be fed a number of different things including small parrot seed mixes, hard-boiled eggs, fresh twigs and buds (ensure these are of a non-toxic nature before feeding them to any bird), fresh fruit and greens.[10]

Breeding season for the Bourke’s parrot tends to occur between the months of August and October but can draw out into December depending on the season and availability of resources. Nests tend to be situated from 1 metre to 3 metres above ground level in hollow limbs of the Mulga tree or Acacia. Eggs are generally laid on a bed of decayed wood at the bottom of the tree hollow. The Bourke’s parrot has a clutch of 3 to 6 eggs, which are incubated by the female for 18–19 days, with the chicks fledging at about 4 weeks of age. Once the chicks hatch both parents feed their young. Offspring become fully independent around 8 to 10 days after fledging. While the female Bourke’s parrot is incubating the eggs she is fed by the male Bourke’s parrot, only leaving the nest to find water or to dedicate.[11] 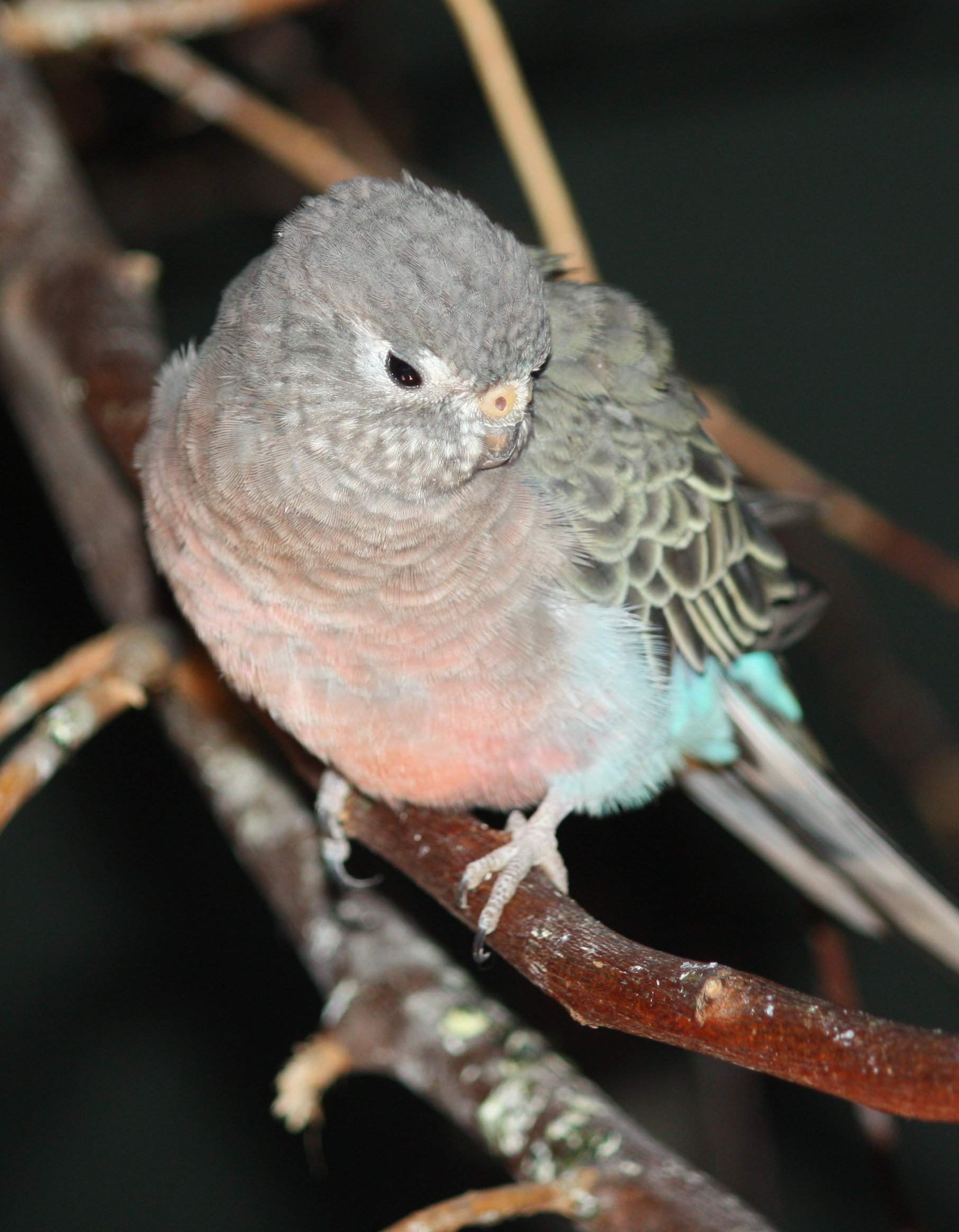 Australian parakeets have a life expectancy of up to 25 years, captivity raised birds are expected however to have a slightly longer life expectancy of those in the wild.[12] The Bourke’s parrot was discovered by Sir Thomas L. Mitchell in New South Wales, 1838. The bird was named after Sir Richard Bourke whom was the Governor of the Australian state New South Wales at the time of discovery. In the wild there have been not been a noticeable decline in species numbers if anything the numbers are steadily increasing.[13] This is likely due to the reasoning that their habitat is so far spread and they have little contact with predators compared to other parakeet species.

During the nesting season males are highly territorial, chasing away any potential intruders or threats. Individuals are considered to be monogamous, staying with a single partner.[14] This species is known to be nomadic following water and food sources. In the wild the Bourke’s parrot tends to live in pairs or small groups but often live in large flocks ranging in the hundred during times of drought. Due to their diet the Bourke’s parrot works as a known seed disperser. The Bourke’s parrot is a popular aviary bird. Due to their peaceful nature Bourke’s parrot may be kept in captivity with a number of other species including finches, doves and other small parakeet species, however it is suggested that only one pair of Bourke’s parrots are kept in a single aviary due to the males being territorial during breeding season.

The Bourke’s parrot is not listed as threatened by the IUCN. The main threat faced by this particular species is predation from red foxes (Vulpes vulpes) introduced from Europe and feral cats (Felis silvestris). Drought and clearing of watering holes can have significant impacts on the species population with the loss of water resulting in declining numbers.