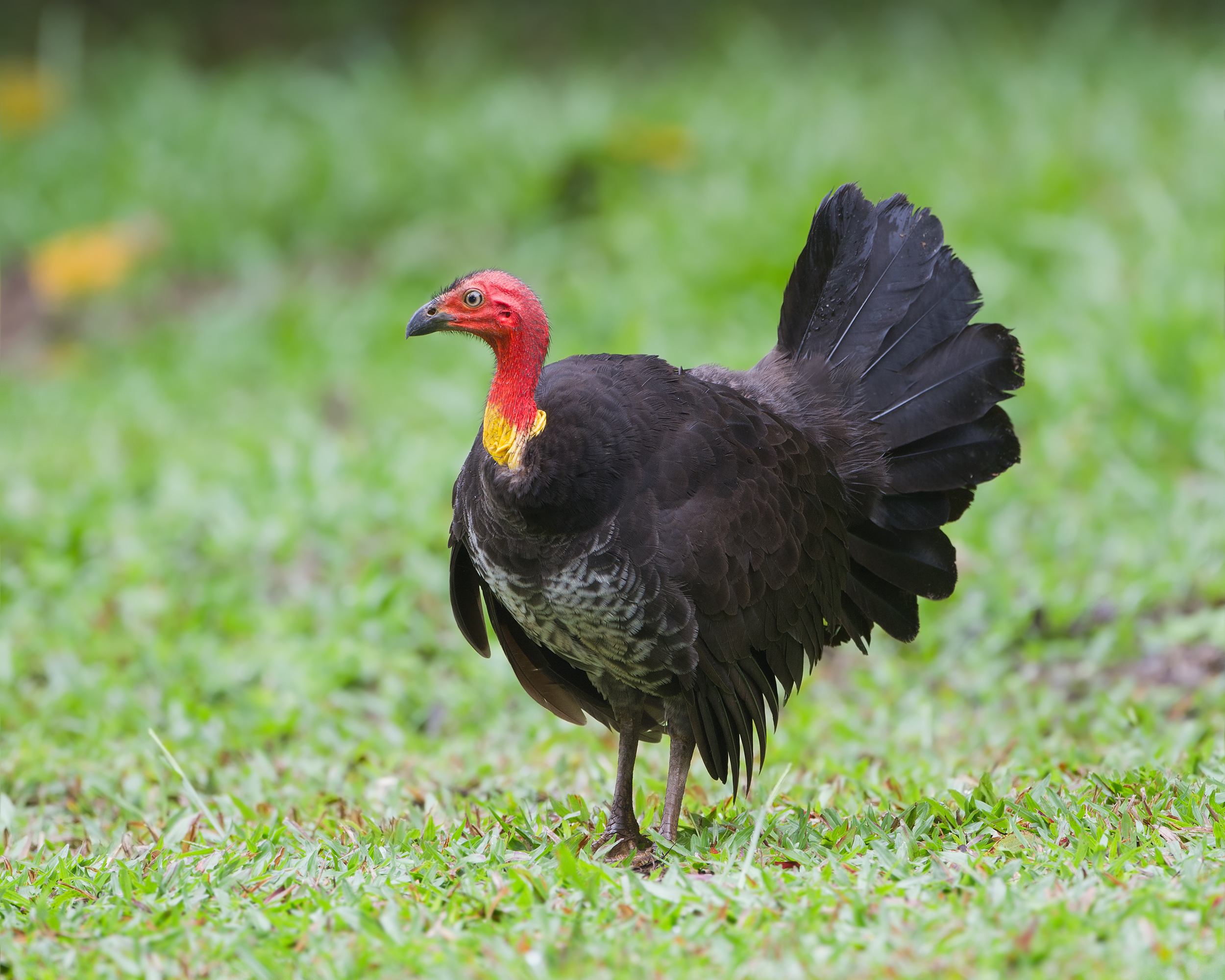 The Australian brushturkey or Australian brush-turkey (Alectura lathami), also frequently called the scrub turkey or bush turkey, is a common, widespread species of mound-building bird from the family Megapodiidae found in eastern Australia fromFar North Queensland to Illawarra in New South Wales. The Australian brushturkey has also been introduced to Kangaroo Islandin South Australia. It is the largest extant representative of the family Megapodiidae and is one of three species to inhabit Australia. Despite its name and their superficial similarities, the bird is not closely related to American turkeys, or to the Australian bustard, which is also known as the bush turkey.

It is a large bird with black feathers and a red head. Its total length is about 60–75 cm (23–30 in) and a wingspan of about 85 cm (33 in). The subspecies A. l. purpureicollisfrom the northern Cape York Peninsula is smaller than the more widespread nominate subspecies. It has a prominent, fan-like tail flattened sideways, and its plumage is mainly blackish, but with a bare red head, and a yellow (in the nominate subspecies) or purple wattle (in A. l. purpureicollis). The male’s wattle becomes much larger during breeding season, often swinging from side to side as they run. The males’ heads and wattles also become much brighter during the breeding and nesting season. The underside of the body is sprinkled with white feathers, more pronounced in older birds. The brushturkey is a clumsy flier and cannot fly long distances, only taking to the air when threatened by predators or to roost in trees at night and during the heat of the day.

The species is communal, forming communal nests. A typical group consists of a dominant male, one or more younger males and several females. They build large nests on the ground made of leaves, other combustible material and earth, 1 to 1.5 metres high (3-4.5 ft) and up to 4 m (13 ft) across. The eggs are hatched by the heat of the composting mound which is tended only by the males who regulate the temperature by adding or removing material in an effort to maintain the temperature of the mound in the 33–35°C (91-95°F) incubation temperature range.[2] The Australian brushturkey checks the temperature by sticking its beak into the mound. Like some reptiles, incubation temperature affects the sex ratio of chicks, however, the mechanism is different between reptiles and these birds, with reptiles exhibiting Temperature-dependent sex determination (TSD), and megapodes exhibiting temperature-dependent embryo mortality. The sex ratio in brushturkeys is equal at incubation temperatures of 34°C, but results in more males when cooler and more females when warmer (p=0.035). It is unclear whether the parents use this to manipulate the sex of their offspring by, for instance, selecting the nesting site accordingly. Warmer incubation also results in heavier, fitter chicks (p<<0.0001), but how this is linked to gender is also unknown.[3]

The same nesting site is frequently used year after year, with the old nests being added to each breeding season. The average clutch of eggs is between 16 and 24 large white eggs, which are laid September to March. Sometimes up to 50 eggs laid by several females may be found in a single mound. The eggs are placed in a circle roughly 60–80 cm (23–31 in) down, 20–30 cm (7–11 in) apart, always with the large end up. The newly hatched young dig themselves out of the mound and then have to care for themselves.

Brushturkey eggs are a favourite food of goannas, snakes, and also dingoes and dogs though brushturkeys were also a staple of Aboriginal Australians. Often goannas exhibit wounds on their tails from having been pecked by brushturkeys who ferociously chase them away from their nests.

In situations where they come into contact with humans, such as picnic areas in national parks and suburban gardens, brushturkeys exhibit little fear and will often boldly attempt to steal food from tables and raid compost bins. They will nest in suburban gardens, and in search of material for their nests will remove enormous amounts of mulch from nearby and neighbouring gardens.

Brushturkeys are now common in urban environments and can be found in backyards in both Brisbane and Sydney.[4]

Brush turkeys are fairly common nowadays, but in the 1930s, the bird was supposed to be approaching extinction.[5]

Brushturkeys feed upon insects, as well as seeds and fallen fruits, which are exposed by raking the leaf litter or breaking open rotten logs with their large feet. The majority of food is obtained from the ground, with birds occasionally observed feeding on ripening fruits among tree branches. 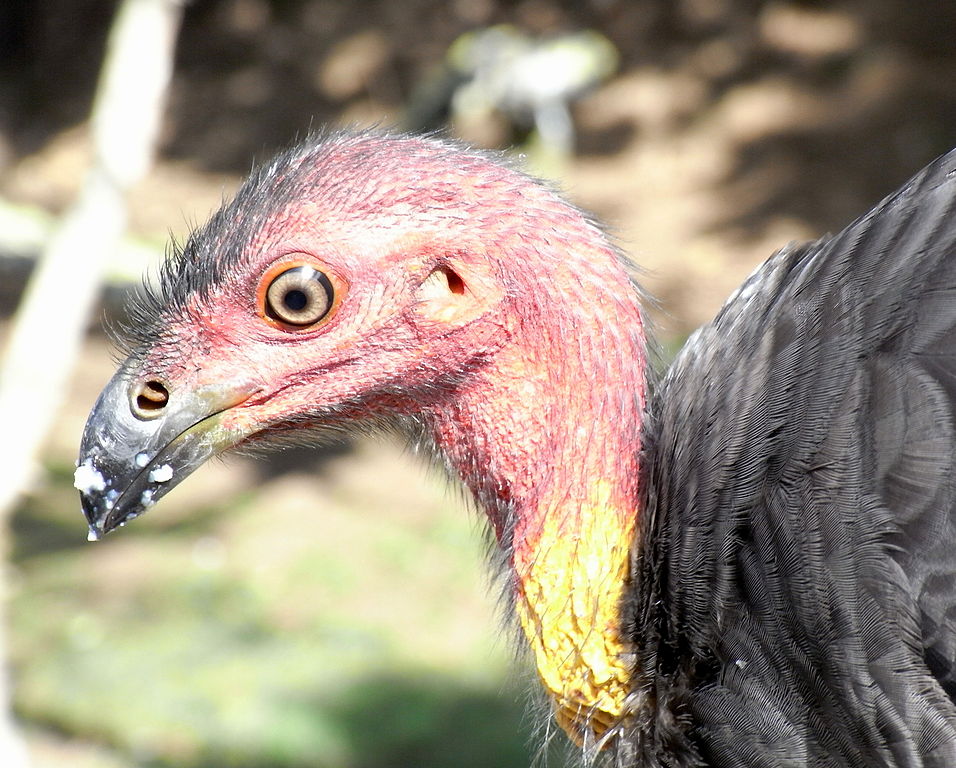 The Australian brushturkey can damage gardens when raking up the ground looking for food.[6] They can also cause extensive damage to food crops.[7] The Department of Environment, Climate Change and Water provides hints for living with brush turkeys in urban environments.[4]

They are sometimes hunted for food, including as part of the diet of traditional Aboriginal Australians.[6][8][9] Their eggs, which weigh on average 180 g (6.3 oz), are also sometimes eaten.[10]